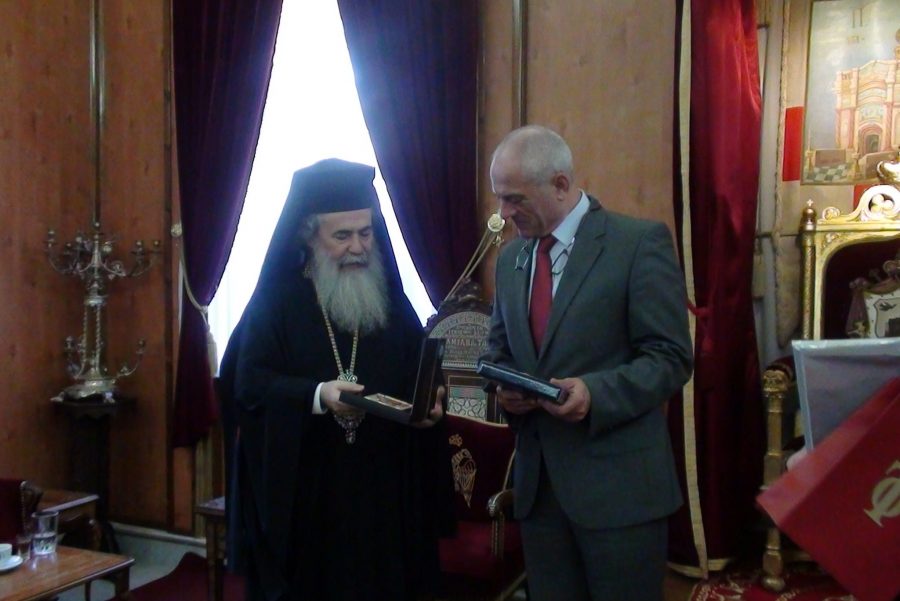 THE NEW AMBASSADOR OF GEORGIA TO ISRAEL VISITS THE PATRIARCHATE

On Friday, the 30th of August/12th of September 2014, the new Ambassador of Georgia to Israel, His Excellency Mr Paata Kalandare, visited the Patriarchate.

Mr Kalandare was received by His Beatitude, Patriarch Theophilos of Jerusalem. An interesting discussion took place during the meeting, on problems facing the Middle East, where the Patriarchate has been called to protect and preserve the All-Holy Shrines, but also Christians residing in the Holy Land.

Talk was also made on the frequent visits of pilgrims from Georgia, even during periods of unrest and conflict between peoples inhabiting the All-Holy Shrines region.

Additionally, His Beatitude congratulated the new Ambassador on the assumption of his duties, and offered him Jerusalemite eulogias, namely the Hagiotaphite calendar in Russian and icons of the Holy Sepulchre.

The Georgian Ambassador thanked His Beatitude for the long and constructive conversation, and offered Him fine wine from his country, before going on to venerate at the Lord’s Life-Giving Sepulchre.