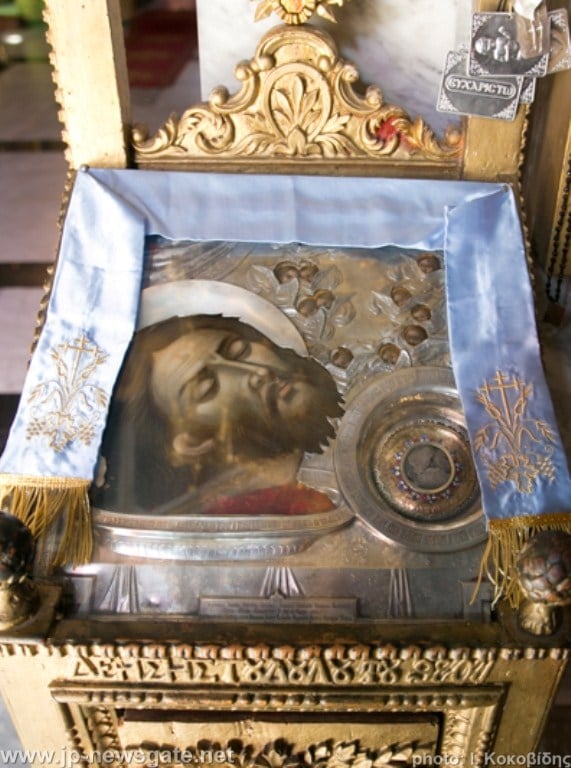 COMMEMORATING THE BEHEADING OF JOHN THE BAPTIST

On Thursday, the 29th of August/11th of September 2014, the Patriarchate commemorated the beheading of John the Baptist at the Monastery dedicated to him, in the Christian quarter of Jerusalem, to the south of the Church of the Resurrection and the chapel of the Dependency of Gethsemane.

The event, passed down to the church by the Evangelists, is celebrated as a venerable day of gladdening mourning. On this day, the Church remembers that Herod, rebuked by John the Baptist for committing adultery with Herodias, his brother’s wife, killed “the greatest among those born of women” (Luke 7, 28). Surrendering to the biddings of the shameless Herodias, he delivered the Forerunner’s head, to be carried amongst the dinner guests on a platter by Salome (Matthew 14, 8-11).

His Eminence Philoumenos, Archbishop of Pella, Patriarchal Commissioner in Irbet, Northern Jordan, led the Vespers and the Divine Liturgy. Co-officiating were Hieromonks and Hierodeacons. The choir of the Church of the Resurrection performed under the direction of Archimandrite Aristovoulos with students at the Patriarchal School of Sion, in Greek, Arabic and Russian. Also in attendance were pious faithful from Jerusalem and pilgrims.

During the service, H.B. Patriarch Theophilos of Jerusalem proceeded to venerate with Hagiotaphite Fathers.

The Patriarchal and Prelatic retinues and all concelebrants were courteously hosted by the Hegoumen, Archimandrite Bartholomew at his quarters.