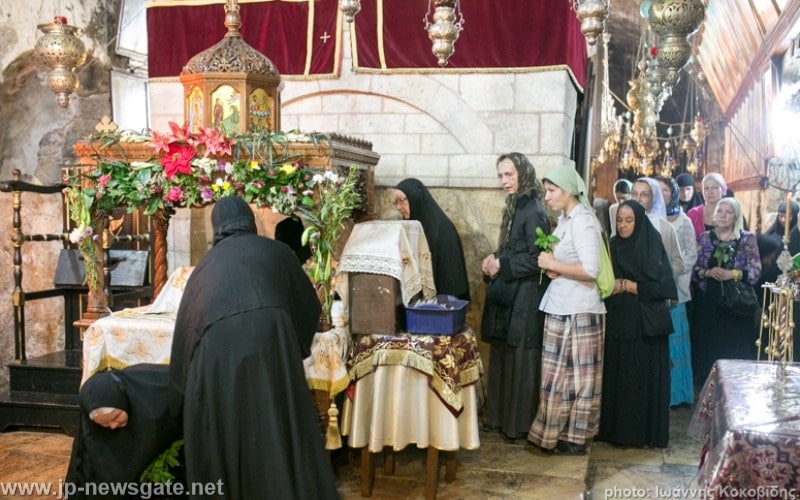 THE APODOSIS OF THE DORMITION OF THEOTOKOS OBSERVED IN JERUSALEM

On Friday, the 23rd of August/5th of September 2014, the Patriarchate observed the Apodosis of the Dormition of Theotokos, namely the completion of eight days after the feast, as is the case with feasts of the Lord and the Mother of God.

A Divine Liturgy was performed on the morning of the aforementioned day at the Sepulchre of Theotokos in Gesthemane.

The Liturgy was followed by a procession of the icon of the Dormition, carried by the Hegoumen, Archimandrite Nektarios, through St Stephen’s Gate and the Via Dolorosa, St Charalambos Monastery and Christian Street, among Priests, monks and nuns. The head cantor of the Church of the Resurrection chanted alongside a flock of locals and pilgrims, venerating the icon.

At the junction between Christian and Patriarchate Streets, His Beatitude Patriarch Theophilos of Jerusalem proceeded to venerate with Hagiotaphite Fathers as well as the Greek Consul General to Jerusalem, Mr Georgios Zacharoudiakis, and his esteemed wife.

The procession carried on until the Gethsemane Dependency, across from the Church of the Resurrection where, after a supplication and the Patriarchal Polychronism, the icon was put back in its place to mediate in favour of the Church of Jerusalem and all those believing in it.