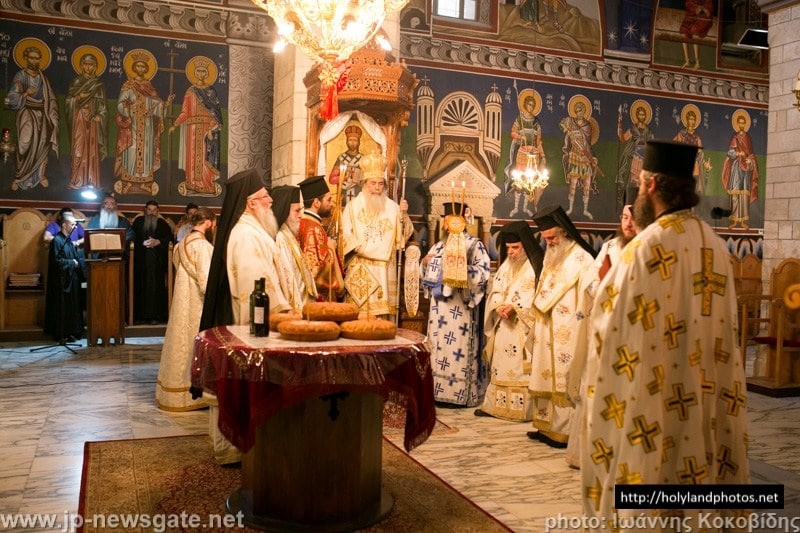 THE FEAST OF THE HOLY PROPHET ELIAS AT THE PATRIARCHATE

On Saturday, the 20th/2nd of August 2014, Prophet Elias the Thesbite was commemorated by the Patriarchate at the Monastery dedicated to him between South New Jerusalem and Bethlehem, near the ruins of the ancient Monastery of the Kathisma (Seat) of Theotokos.

Through the site of this Monastery the Prophet Elias escaped persecution from idolater kings Ahab and Jezebel and there he slept under a broom bush (3, Kings 19, 5) until being woken by an angel of the Lord with these words: “Get up and eat and drink, for the journey is too much for you”. So he got up and ate and drank. Strengthened by that food, he traveled forty days and forty nights until he reached Horeb, the mountain of God.(3, Kings 19, 4-8).

His Beatitude Theophilos, Patriarch of Jerusalem, led the Matins and Divine Liturgy at the Monastery. Co-officiating were the Most Reverend Isychios, Metropolitan of Kapitolias; the Elder Secretary-General, Archbishop Aristarchos of Constantina; the Patriarchal Commissioner in Bethlehem, Archbishop Theophylaktos of Jordan, and the Secretary of the Holy and Sacred Synod, Archbishop Demetrios of Lydda; also, Hagiotaphite Hieromonks and Hierodeacons. The choir sang under the direction of the Head Cantor of the Church of the Resurrection, the Very Reverend Archimandrite Aristovoulos, in Greek, Russian and Romanian. The choir of the Cathedral of St James the Brother of God sang under the direction of Mr Rimon Kamar in Arabic. The faithful, albeit few in number due to the uncontrollable war situation in Gaza, prayed in piety and warmth of soul for the fulfillment of their personal requests and the prevalence of peace. They came from Jerusalem, Greece and Russia but not from the occupied areas, for the same reason of political unrest and atrocities.

During the service, His Beatitude preached the word of God in Arabic, see link: https://en.jerusalem-patriarchate.info/ar/2014/08/02/6773

At the conclusion of the Divine Liturgy, the renovator of the Monastery, Hieromonk Paisios hosted everyone to refreshments at the Hegoumen’s Quarters. At noon, the Patriarchal Retinue and others were hosted to lunch at a restaurant near the Monastery.