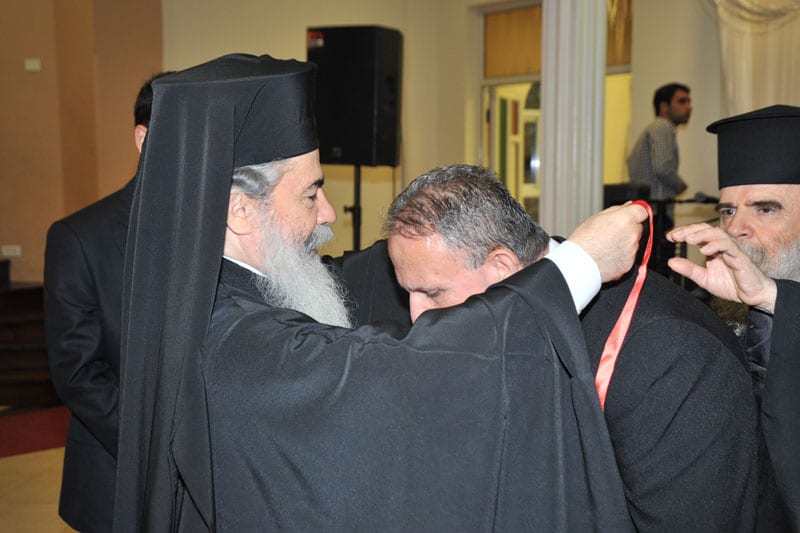 On the evening of Tuesday, the 2nd/15th of July 2014, H.B. Patriarch Theophilos of Jerusalem, accompanied by the Patriarchal Commissioner, the Most Reverend Isychios, Metropolitan of Kapitolias; the Elder Secretary-General, His Eminence Archbishop Aristarchos of Constantina; and the Very Reverend presbyter f. Issa Musleh, participated in the reception held in His honour at the town of Shepherds Village/Beit-Sahour, by Mr Jiries Kumsiyeh and his son, Mr Bashar Jiries Kumsiyeh.

In the context of this reception, His Beatitude conferred the title of Crusader Minor of the Equestrian Order of the Holy Sepulchre to the hosts of the event for their substantial interest in favour of the Patriarchate and its flock, either from the U.S., where Mr J. Kumsiyeh lives and works as an entrepreneur alongside his son Dr B. Kumsiyeh, or from their birthplace of Beit-Sahour. The Patriarch’s address in Arabic was read by f. Issa Musleh and may be reached here: https://en.jerusalem-patriarchate.info/ar/2014/07/17/6579