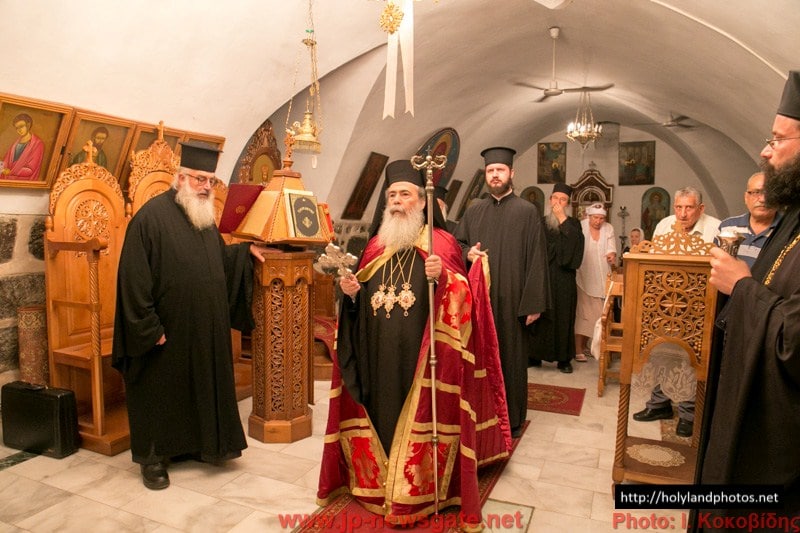 THE FEAST OF THE GATHERING OF THE APOSTLES IN TIBERIAS

On Sunday, the 30th of June/13th of July 2014, the feast of the Gathering of the Twelve Holy Apostles was celebrated at the Holy Monastery dedicated to them, near the Western shore of the Tiberian sea, at the centre of the present-day big Israeli city of Tiberias.

At the church of the Monastery, which preserves many of the building components of the ancient church which is linked to the Lord’s miracle, namely His appearance before His disciples after the Resurrection, when He instructed them to throw their nets on the right side of the boat (John 21, 6) and then eat from the fish and bread that lay on the coal (John 21, 9), which constitutes the evangelical excerpt of the 10th Eothinon Gospel of Sundays – His Beatitude Theophilos, Patriarch of Jerusalem, led the Matins and Divine Liturgy. Co-officiating were the Most Reverend Kyriakos, Metropolitan of Nazareth and Hieromonks from nearby Monasteries of the Patriarchate. Cantors from neighbouring communities sang, while Greek pilgrims and Russian-speaking and Arab-speaking faithful participated in piety.

At the conclusion of the Divine Liturgy, Abbot f. Timotheos hosted the Patriarchal retinue to lunch, which was followed by lunch with fish from the Tiberian sea.