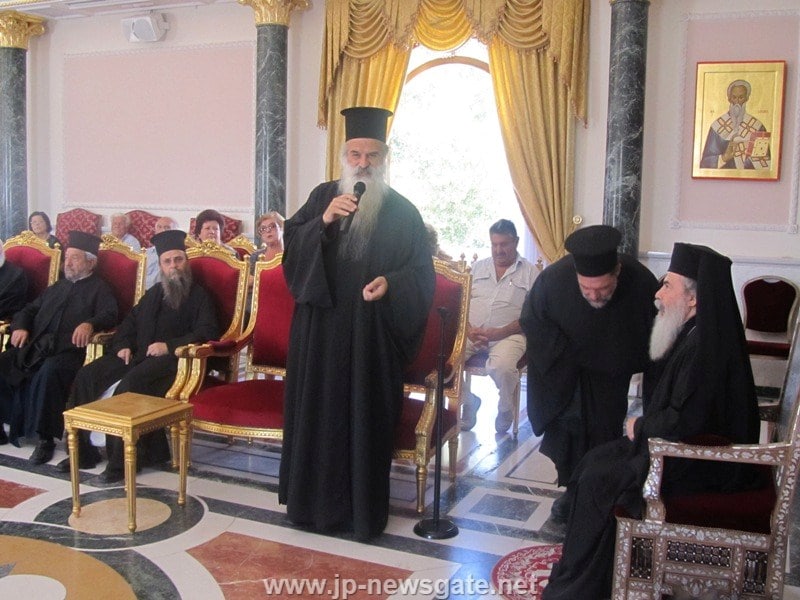 H.B. THE PATRIARCH OF JERUSALEM DECORATES METROPOLITAN NEKTARIOS OF PETRA AND CHERRONISOS

On Saturday the 13th/28th of June 2014, the Most Reverend Metropolitan Nektarios of Petra and Cherronisos, of the Church of Crete, while on a pilgrimage visit to the Holy Land, and heading a group of 100 pilgrims from his Bishopric and other Bishopric of Crete, was received by H.B. Patriarch Theophilos of Jerusalem.

Addressing His Beatitude, the Metropolitan of Petra praised Him and the Hagiotaphite Fathers for their centuries-long work of guarding the Holy Lands.

His Beatitude thanked the Metropolitan of Petra for his support towards the Patriarchate of Jerusalem and the Holy Land and went on, in recognition of his contribution, to award him the title of the Supreme Taxiarch of the Equestrian Order of the Holy Sepulchre.

Moved, the Metropolitan of Petra thanked His Beatitude for the honour conferred on him, and pledged to carry on manifesting his interest in favour of the Patriarchate of Jerusalem, in favour of the pilgrims and the glory of God.