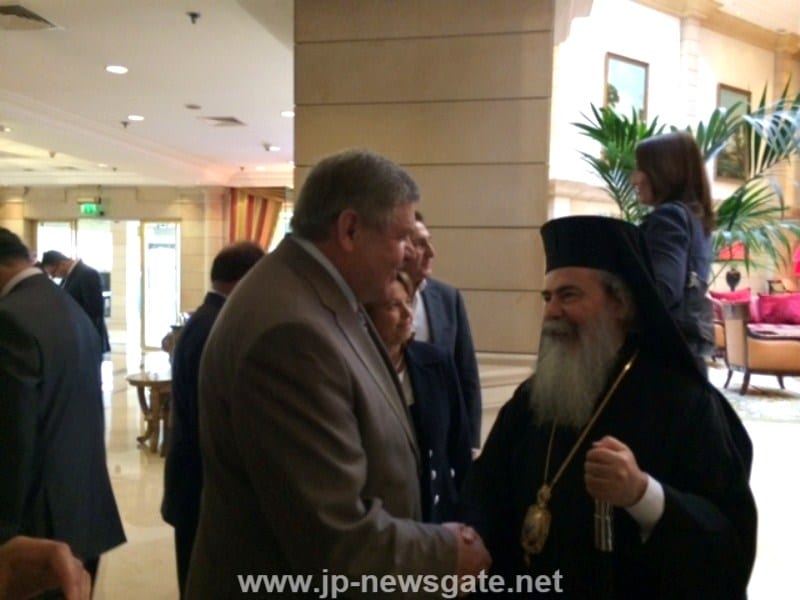 On Thursday the 6th/19th of June 2014, a meeting was held between the Presidents of the Middle East Council of Churches (MECC) at the Marriott Hotel in Amman.
At the meeting, the Orthodox Family was represented by His Beatitude Theophilos, Patriarch of Jerusalem, accompanied by the Elder Secretary-General, Archbishop Aristarchos of Constantina; His Eminence Archbishop Philoumenos of Pella, and the Hegoumen in Fhes, the Very Reverend Archimandrite Ieronymos.

The Roman Catholic Family was represented by the Patriarch of the Syrian Catholic Church in Antioch, Mr Ignatius Youssef III Younan; the Protestant Family by His Grace Munib Younan, Bishop of the Evangelical Lutheran Church in Jerusalem. His Holiness Aram I, Catholicos of the Holy See of Cilicia of the Armenian Apostolic Church, was unable to attend the meeting due to other obligations and authorized his co-Presidents to decide in his name.

The main topic of the Meeting, which was convened and hosted by Patriarch Theophilos of Jerusalem through the Council’s Locum Secretary-General, Mr Michel Jalakh, was to discuss and evaluate the current situation of the Middle East Council of Churches along general lines.

During their opening addresses, the Presidents of the Families underlined the significance of MECC’s work in terms of bringing out topics of concern to Christians in the Middle East and requirements for their coexistence with Muslims in these areas. Locum Secretary-General, Mr Michel Jalakh, thanked the Presidents for their support and presence at the Meeting, before informing them about the Council’s agenda on its fortieth anniversary.

The topics awaiting resolution are:

These topics were analyzed in Mr Jalakh’s report, which was praised and approved by the Presidents of the Council.

At noon, the Director of the Marriott Hotel hosted the Presidents and their retinues to lunch. Also invited were the Ambassadors of the European Union, Russia, Romania, Bulgaria, Cyprus, Greece, Libya, Morocco etc.

During lunch, His Beatitude Theophilos addressed those present in English, see link:  https://en.jerusalem-patriarchate.info/2014/06/19/7626

The Presidents reconvened after lunch until the evening hours of the same day.

The Statement released by the Presidents on the Meeting can be reached here: https://en.jerusalem-patriarchate.info/2014/06/19/7624