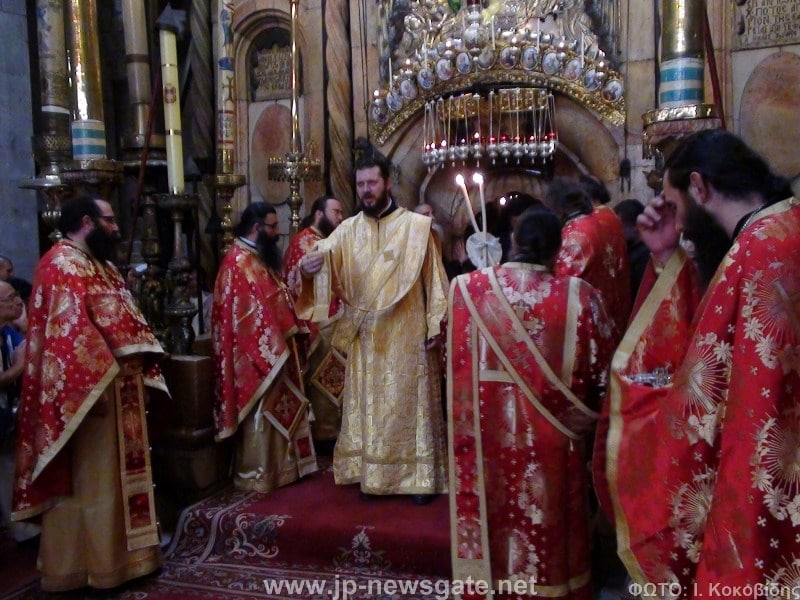 On Sunday the 26th of May/8th of June 2014, the feast of Pentecost was observed at the Patriarchate in commemoration of the miraculous descent of the Holy Spirit, the Spirit of Christ, on His holy disciples and apostles on the fiftieth day after the Resurrection. Blessed with the Holy Spirit, they spoke of the Lord’s wonders in other tongues, according to the Acts of the Apostles (2, 1-11), and attracted to the Lord three thousand souls on that day, marking the beginning of the appearance and exodus of the Church of Christ to the world.
This event, which came to pass in Sion, was celebrated at the Lord’s Holy Sepulchre during the Divine Liturgy, led by the Patriarchal Commissioner, Metropolitan Isychios of Kapitolias. Co-officiating with him were their Eminences, Archbishops Theodosios of Sebaste and Demetrios of Lydda, with Hagiotaphite Hieromonks and Hierodeacons. The choir chanted under the direction of head cantor Archimandrite Aristovoulos, in the presence of a crowd of local faithful as well as pilgrims from Greece, Russia, Romania, Serbia and other Orthodox countries.

The Liturgy was followed by the Vespers of the Holy Spirit Monday and Kneeling Wishes. At the conclusion of the service, the Prelates proceeded to the Patriarchates.

There, the Most Reverend Metropolitan Isychios of Kapitolias wished to all that they be enlightened by the Holy Spirit, also conveying wishes by His Beatitude Patriarch Theophilos of Jerusalem.