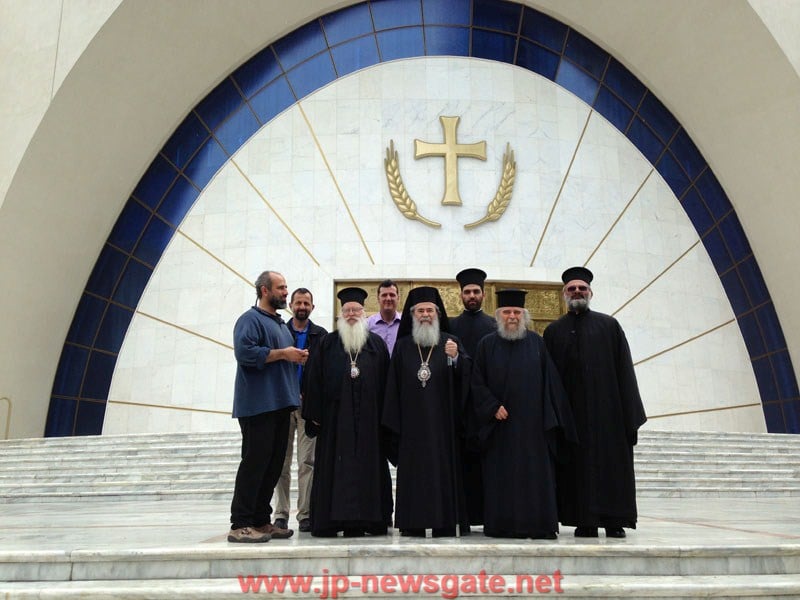 On Sunday the 19th of May/1st of June 2014, the Sunday of the Holy Fathers, the Church of the Resurrection of the Archbishopric of Albania was inaugurated in Tirana.
The magnificent, fine church is one of the many works of public benefit offered by the Holy Bishopric of Albania. The said Archbishopric was spiritually inert under the atheist Communist regime, yet it is now reborn owing to the faith, wisdom and endeavours of His Beatitude Anastasios, Archbishop of Albania.

In attendance at the ceremony were the Leaders or representatives of most Orthodox Churches.

The Patriarchate of Jerusalem was represented by His Beatitude, Patriarch Theophilos of Jerusalem. H.B. was accompanied by the Elder Secretary General, Archbishop Aristarchos of Constantina, and Archdeacon Evlogios.

His Beatitude and retinue were received at Tirana Airport by His Beatitude, Archbishop Anastasios of Tirana, the Most Reverend Metropolitan Demetrios of Argyrokastro and assistant Bishop Nathaniel of Amantia, on Friday the 18th/30th of May.

On the afternoon of the same day, H.B. the Patriarch of Jerusalem visited the Monastery of St Vlasios in the Bishopric of Dyrrhachium, where the Archbishopric of Albania maintains a boarding school, an orphanage, a convent and a Theological School. There, His Beatitude was warmly received by nuns and residents of the aforementioned institutions.

The following day, the Patriarch of Jerusalem and His retinue, accompanied by Mr Orpheus Bitsis, representative of the Archbishopric of Albania, visited the martyrdom site of St Cosmas of Aetolia within the Bishopric of Berat.

On this very site, a Church dated to 1814 was discovered and unearthed at the initiative of His Beatitude Archbishop Anastasios of Albania. The Church, dedicated to St Cosmas of Aetolia, has been renovated to serve today as the parish church of a small Orthodox settlement. Its vicar, f. Raphael, welcomed the Patriarchal retinue.

The tomb of St Cosmas, its originality verified from the saint’s wall-painting over it, was discovered in an adjacent chapel where His Beatitude and Retinue proceeded to venerate.

On the morning of Sunday the 19th of May/1st of June 2014, the Sunday of the Holy Fathers, the Church of the Resurrection was inaugurated in the framework of an Orthodox ceremony which included the procession of the holy relics thrice around the Church, deposition of the relics on the Holy Altar, the smearing of the Altar with Holy Myrrh, the setting of the icons of the Evangelists, and the sealing of the church walls with myrrh.

After the consecration of the holy Altar, the Divine Liturgy was held, led by His All-Holiness Ecumenical Patriarch Bartholomew. Co-officiating were His Beatitude Patriarch Theophilos of Jerusalem; H.B. Patriarch Irinej of Serbia; H.B. Patriarch Daniel of Romania; H.B. Archbishop Chrysostomos of Cyprus; H.B. Archbishop Ieronymos of Athens and All Greece; H.B. Archbishop Savva of Poland; and representatives of the Patriarchates of Alexandria, Antioch, Russia, Bulgaria, Georgia, and of course H.B. Archbishop Anastasios of Albania. In attendance was a great crowd of faithful, as well as the President of the Albanian Government, alongside the Prime Minister and Opposition Leader, and the Mayor of Tirana.

The service was indeed a pan-Orthodox testament to the rebirth and resurrection of the Church of Albania, and also to the unity between Orthodox Churches.

Addresses between the Archbishop of Albania and the Ecumenical Patriarch were exchanged during Communion.

At the conclusion of the divine Liturgy, the Heads of Churches and their attendants proceeded to the Synodicon, where the Ecumenical Patriarch and the Archbishop of Albania exchanged gifts.

An official lunch followed at the hotel where the Leaders are staying, in the presence of the Albanian President and the Mayor of Tirana. During lunch, Patriarch Theophilos of Jerusalem addressed the Archbishop of Albania in Greek and offered him an icon of Theotokos and a stone from Golgotha, to be placed for veneration at the newly inaugurated Church of the Resurrection.

Addresses to the Archbishop of Albania were also delivered by the rest of the Leaders of Orthodox Churches or their representatives.

After lunch, the Leaders attended a music concert, after which His Beatitude Theophilos left for the Airport of Tirana. He arrived at Ben Gurion Airport on the 20th of May/2nd of June via Constantinople.