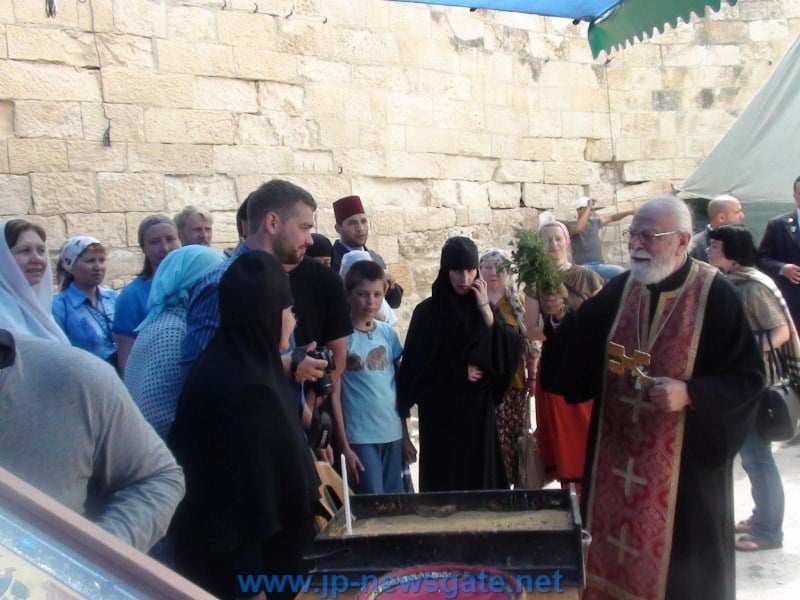 On Thursday, the 16th/29th of May 2014, the Thursday of the Ascension, the Patriarchate commemorated the Ascension of Our Lord Jesus Christ into heaven to sit on the right of His Father. This particular event essentially marked the completion of God’s economy for our salvation, as Jesus Christ, God’s Son and Word, placed on the right of the Father our human nature, the one He received during His Incarnation, Crucifixion and Resurrection. It was followed by the enlightenment of the Apostles by the Holy Spirit and the founding of the Church.
Vespers for the feast was officiated at the Ascension site, today held by Muslim Waqfs, according to special arrangements for the time allocated to each Christian Community in view of this year’s common celebrations for Easter, therefore of the Ascension too.

Vespers was followed by a procession towards the Viri Galilaei Monastery on the Mount of Olives, where the Evangelical pericope of the First Eothinon was recited, the Patriarch of Jerusalem blessing the crowd who then walked back to the Ascension site.

On the morning of the feast, the Divine Liturgy was led again by Archbishop Damascene of Joppe with co-officiating Archimandrites and Hieromonks, and Arab-speaking and Russian-speaking Presbyters. In attendance was a great crowd of pilgrims from Greece, and locals from the North of Israel and from the South of the occupied areas.

During the Divine Liturgy, and after having officiated at the Church of Sts Constantine and Helen, H.B. Patriarch Theophilos of Jerusalem proceeded to venerate in the company of members of the Holy Synod and other Hagiotaphite Fathers.

After venerating, His Beatitude visited the adjacent mosque and venerated the Holy Monastery of the Ascension, erected by the late Archimandrite Joakim and preserved today by Monk Achillios and tenths of nuns.

His Beatitude went on to visit the Russian Convent of the Ascension, during the performance of the Divine Liturgy by Bishop Gabriel of Canada, of the Russian Orthodox Church outside of Russia, and blessed the flock.

Finally, His Beatitude visited the Monastery of Viri Galilaei, where he was hosted to breakfast by the Hegoumen, Archimandrite Anthimos.