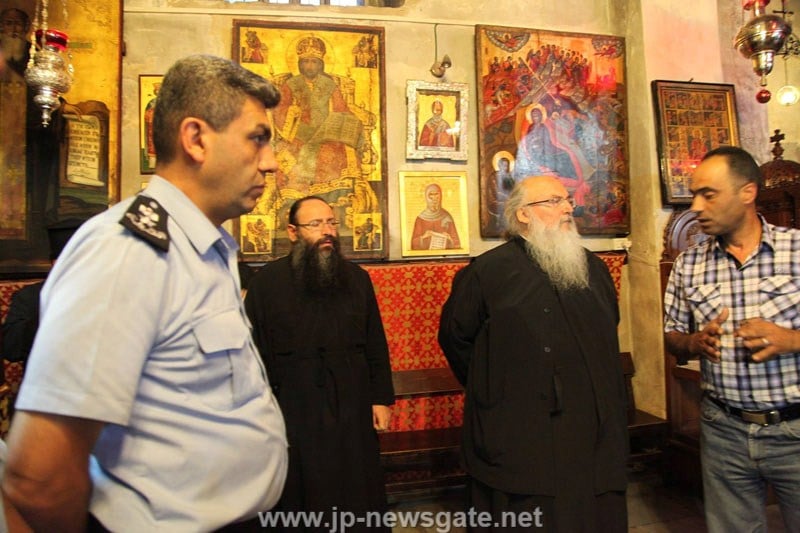 On the morning of Tuesday the 14th/27th of May 2014, the Divine Cavern of Bethlehem was found damaged by fire. The damage was discovered by Orthodox Archimandrite f. Theophanes at 3:00 am of the aforementioned day, on his way towards Censing and the Matins Service.

Approaching from the south gate of the Cavern, Archimandrite Theophanes noticed heavy smoke and the power supply cut off. Once inside the Cavern, he found the curtains of the internal walls burnt, the walls themselves blackened with soot and two roof oil lamps lying on the ground, as the fire had burnt the rope they were hanging from. Also, the taper of the Armenians, on the marble before the Star, had been moved near the kerbside of the Holy Altar cover, over the Star.

The Archimandrite notified the Patriarchal Commissioner and Hegoumen in Bethlehem, His Eminence Archbishop Theophylaktos of Jordan, who arrived at the scene to verify the above.

Archbishop Theophylaktos went on to notify His Beatitude Theophilos, our Father and Patriarch of Jerusalem, then in Amman, Jordan. The Palestinian Police was also called and arrived in the morning, as well as the Secretary of the Holy and Sacred Synod, His Eminence Demetrios, Archbishop of Lydda, in an effort to assess the situation and its causes.

The Patriarchate and the Palestinian Police investigate whether the fire was caused by technical failure or arson.

Bethlehem’s Hagiotaphite Fathers, in collaboration with the Patriarchate, have restored the damages, namely replaced the burnt wall hangings with new ones and cleaned the blackened walls. Their investigation into what caused the fire carries on.

In its own report, the Palestinian Police has ruled that the fire was caused by a short circuit.

At noon on Wednesday the 15th/28th of May, His Beatitude Patriarch Theophilos of Jerusalem visited the Divine Cavern for further information and inspection, in the company of His Eminence Metropolitan Isychios of Kapitolias and the Elder Secretary-General, His Eminence Archbishop Aristarchos of Constantina.