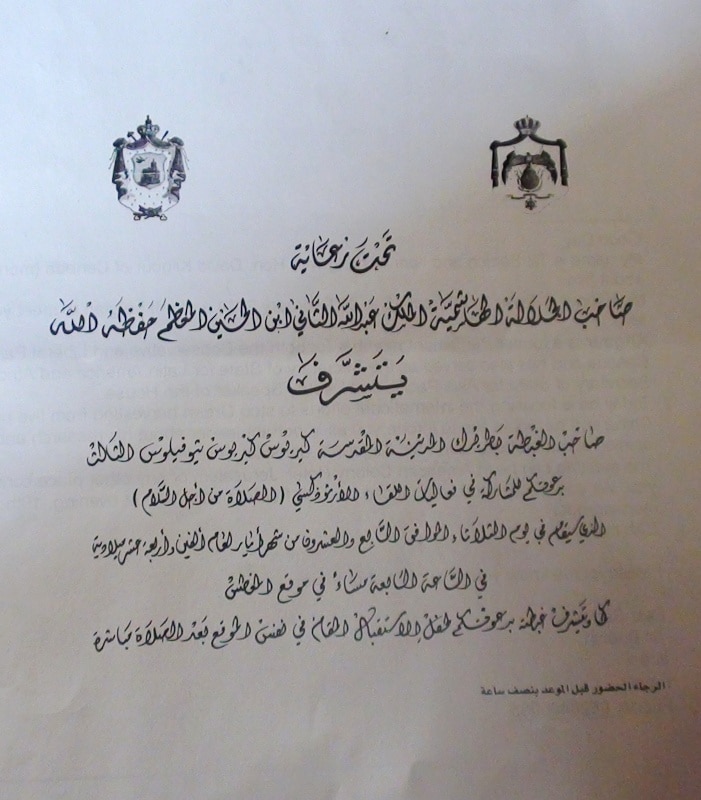 ORTHODOX CHURCHES INVITED BY THE KING OF JORDAN

On Tuesday the 14th/27th of May 2014, His Majesty King Abdullah ibn Hussein of Jordan received at the palace delegates of Orthodox Churches, headed by Patriarch Theophilos of Jerusalem.

The meeting took place at the invitation of the king (see photo) addressed to the Heads of Orthodox Churches through Patriarch Theophilos. Positively responding to the invitation were the Patriarchates of Russia, Serbia, Romania and Bulgaria.

The distinguished delegates arrived in Jordan on the day before the Meeting.

On the evening of Monday the 13th/26th of May 2014 they were hosted to dinner by the Patriarchal Commissioner in Amman, the Most Reverend Metropolitan Benedict, in the presence of Patriarch Theophilos of Jerusalem, Archbishop Aristarchos of Constantina and the Hegoumen at Fhes, Archimandrite Ieronymus.

His Majesty the King of Jordan received the delegates on Tuesday the 14th/27th of May, for lunch at the palace.

At the beginning of lunch, His Majesty the King welcomed the Patriarch and Church delegates as “brothers”, congratulating them on their participation in that historical meeting and in the scheduled assembly at the Lord’s baptismal site. The assembly, held in favour of a peaceful coexistence of religions, contributes to the efforts made by Jordan in the context of its custodianship of both Christian and Muslim holy sites in Jerusalem, towards supporting Christian and Muslims in Jerusalem and the occupied areas against the challenges of extreme Israeli elements.

The Jordanian Government, according to the King, continues to have its say over the frozen but not ceased negotiations between the Israeli and the Palestinians, and can already see their results, while several other issues are expected to be resolved too, such as the Jerusalem question. The King went on to say that they wanted for the churches to look at Jordan as an open door for positive response and the royal Hashemite family as their supporter.

On the evening of the aforementioned day, the representatives of Churches assembled on the site of the Lord’s baptismal, on the Easter Bank of the river Jordan, at the Monastery of St John the Baptist, erected by Metropolitan Benedict of Philadelphia.

There, the Patriarch of Jerusalem put on a mantle and a pallium before they all prayed for reconciliation, understanding, peace and justice. The Arab-speaking choir of the Bishopric in Amman chanted in Greek and Arabic.

His Beatitude Patriarch Theophilos went on to recite a wish for peach. Likewise, all representatives of the Orthodox Churches recited a wish for peace in their own language.

The Patriarch then addressed all those present in English, see link: https://en.jerusalem-patriarchate.info/2014/05/27/7172

After His address, His Beatitude offered Prince Emir Ghazi and each delegate an icon of Theotokos, before hosting all to dinner at the “Four Seasons” hotel in Amman.