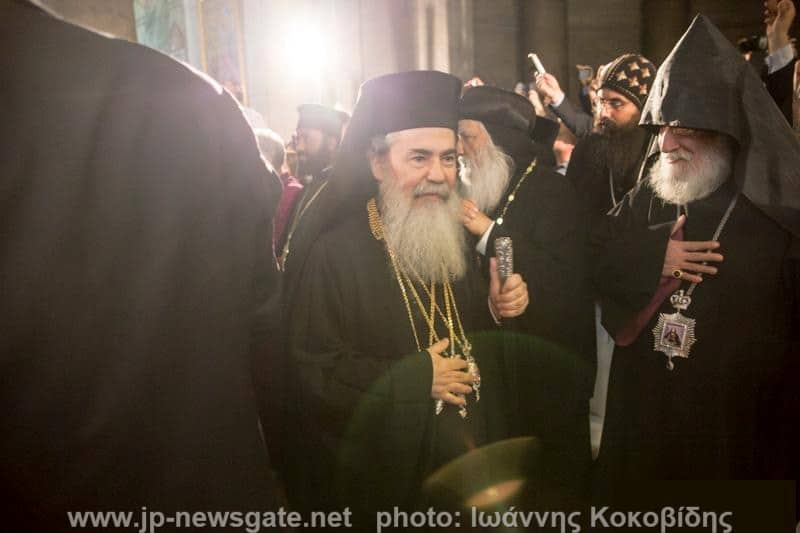 On the evening of Sunday, the 12th/25th of May 2014, at 7:00 pm, His Holiness Pope Francis I met with His All-Holiness Ecumenical Patriarch Bartholomew at the Holy Sepulchre, in commemoration of the meeting held fifty years ago between their predecessors, Ecumenical Patriarch Athenagoras and Pope Paul VI.

The meeting was hosted by the Patriarchate of Jerusalem jointly with the Hagiotaphite Brotherhood and the Brotherhood of the Franciscans Monks, according to the schedule drafted by both.

As per this schedule, Pope Francis, accompanied by the Custodian of the Holy Land, f. Pierrebatista Pizzaballa and the Armenian Patriarch Nourhan, proceeded to the Court of the Church of the Resurrection from the Muristan quarter, through the Gate of the Gethsemane Dependency, whereas His All-Holiness Ecumenical Patriarch Bartholomew, accompanied by His Beatitude Patriarch Theophilos of Jerusalem, and Primates accompanying the Ecumenical Patriarch and the Patriarch of Jerusalem, walked from the Patriarchate along Christian Street through St Helen’s Gate.

From these two Gates, the Pope and the Ecumenical Patriarch proceeded to the beginning and the center of the Courtyard of the Church of the Resurrection, and exchanged embraces as a testament of love and the will to continue the theological dialogue initiated fifty years ago.

From there, the two Primates proceeded to the Gate of the Church of the Resurrection, where they were received by the three Abbots of the Church, namely Archbishop Isidoros of Hierapolis, the Franciscan and the Armenian Abbots.

Subsequently, the Primates venerated the Stone of the Holy Apokathelosis. The Greek choir of the Church of the Resurrection, under the direction of the head cantor, Archimandrite Aristovoulos, chanted, as the two Patriarchs walked to the Holy Sepulchre.

In front of the Holy Aedicula, the two Primates took their places whereas a crowd of 400 faithful had already been seated.

As the crowd observed in silence, His Beatitude Theophilos delivered an address in English, on behalf of the Patriarchate of Jerusalem, the Franciscans and the Armenians, see link: https://en.jerusalem-patriarchate.info/2014/05/25/7064

The address was followed by hymns and the Evangelical pericopes of the Resurrection, and speeches delivered by Ecumenical Patriarch Bartholomew and Pope Francis.

“Our father” was then recited in Italian by Pope Francis and the Ecumenical Patriarch, whereas guests recited the same prayer in their native tongues.

Of note is the fact that the hymns were sang and the Evangelical pericopes recited in the absence of sacerdotal vestments, because of the lack of full communion between the Roman Catholic and Orthodox Churches.

At the end of this ceremony, the Primates and a small retinue venerated the Golgotha.

From there, the Primates and their guests were hosted to a reception at the Latin Patriarchate.