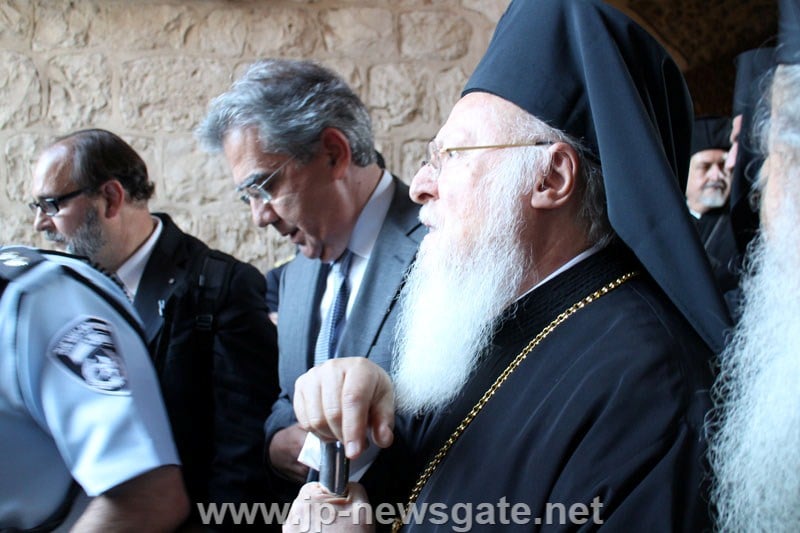 THE VISIT OF THE ECUMENICAL PATRIARCH TO THE PATRIARCHATE OF JERUSALEM

The website of the Patriarchate would like to inform its followers that His All-Holiness Ecumenical Patriarch Bartholomew arrived at 4:00 pm at Ben Gurion airport, Tel Aviv, accompanied by His Eminence Archbishop Demetrios of America, and the Most Reverend Metropolitans: Gennadios of Italy and Meliti; Ioannis of Pergamos; Iacovos of Prince Islands; Emmanuel of France; and Gennadios of Sasima. Also, His Eminence Archbishop Job of Telmessos; the Chief Secretary, Archinandrite f. Bartholomew Samaras; the Very Reverend Archdeacon Maximos Vgenopoulos; the Very Reverend Patriarchal Deacon, Mr Andreas Sophianopoulos; the very Honourable Theodoros Angelopoulos, Archon Megas Logothetis (The Grand Deputy); the very Honourable Panteleimon Vingas, Archon Megas Hartophylax (The Grand Archivist) and the most erudite Nikolaos Tzoitos, Nikolaos Magginas, Nikolaos Papachristos, Symeon Fratzelas and Panteleimon Kioses.

His Beatitude Theophilos, Patriarch of Jerusalem, received the Ecumenical Patriarch at the airport, in the company of the Most Reverend Metropolitan Isychios of Kapitolias; the Elder Secretary General, His Eminence Archbishop Aristarchos of Constantina; the Patriarchal Commissioner in Constantinople, His Eminence Archbishop Nektarios of Anthedon; and the Secretary of the Holy and Sacred Synod, Archbishop Demetrios of Lydda. Also in attendance, on behalf of the Government of Israel, were: Tourism Minister Mr Uzi Landay; the former ambassador of Israel to Turkey, Mrs Amire; and the President of the Christian Affairs Department at the Interior Ministry, Mr Cezar Margie.  Representing the Greek Government, were the representative of the Greek Embassy to Israel, Mrs Lourbakou, and the Greek Consul-General to Jerusalem, Mr Georgios Zacharoudiakis.

At 6:15 pm, His All-Holiness Ecumenical Patriarch Bartholomew arrived at David’s Gate, where He was warmly received by Hagiotaphite Fathers and a crowd of faithful. From there, He proceeded to the Patriarchate, with the Greek Orthodox Boy Scouts leading the procession.

From the Patriarchate, accompanied by His Beatitude Patriarch Theophilos of Jerusalem, His All-Holiness the Ecumenical Patriarch walked to the Church of the Resurrection amid bells ringing.

After venerating at the Holy Apokathelosis and the Holy Sepulchre, His All-Holiness presided over Doxology at the katholikon.

Subsequently, the Ecumenical Patriarch venerated at the Golgotha and proceeded to the Patriarchates, where He was addressed by the Patriarch of Jerusalem.

After the Ecumenical Patriarch’s words of thanks, Patriarch Theophilos offered Him a fine set of Patriarchal engolpiya(icons worn on the chest).

This marked the end of the welcoming ceremony on the arrival of Ecumenical Patriarch Bartholomew.