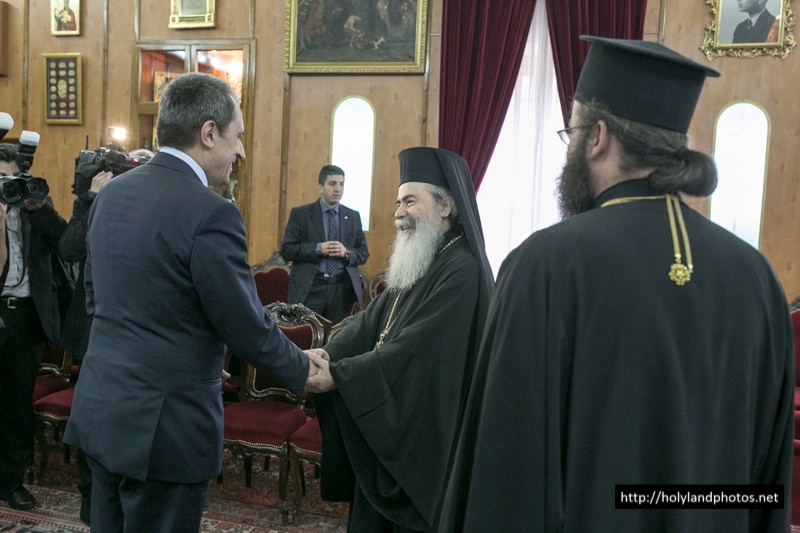 In the afternoon of Tuesday the 7th/20th of May 2014, His Excellency the Bulgarian Prime Minister, Mr Plamen Oresharski, while in an official visit to the state of Israel, visited the Patriarchate in the company of Bulgaria’s Foreign Minister Mr Kristian Vigenin, Health Minister Mrs Tanya Andreeva, Agriculture Minister, Mr Dimitar Grekov, his wife, members of the Bulgarian Parliament, the Bulgarian Ambassador to Israel, Mr Dimitar Mihaylov and other associates of his.

In the context of this visit, His Beatitude, Patriarch Theophilos of Jerusalem, awarded the Prime Minister with the Great Cross of the Equestrian Order of the Holy Sepulchre for his contribution to the Church and to prosperity in his country, with the wish that the medal shall remain a link between the Patriarchate of Jerusalem and the country and Church of Bulgaria. His Beatitude addressed the Prime Minister in English, see link:  https://en.jerusalem-patriarchate.info/2014/05/20/6984

Touched, the Prime Minister thanked His Beatitude, adding that the honour conferred upon him through the medal is reflected onto the entire people of Bulgaria, and offering Him the icon of St Boris, the country’s patron saint.

His Beatitude offered the Prime Minister an icon of Theotokos and the “History of the Church of Jerusalem”, authored by the late Chrysostomos Papadopoulos.

From there, the Prime Minister proceeded to the Holy Sepulchre, where he was received by His Eminence Isidoros, Archbishop of Hierapolis.