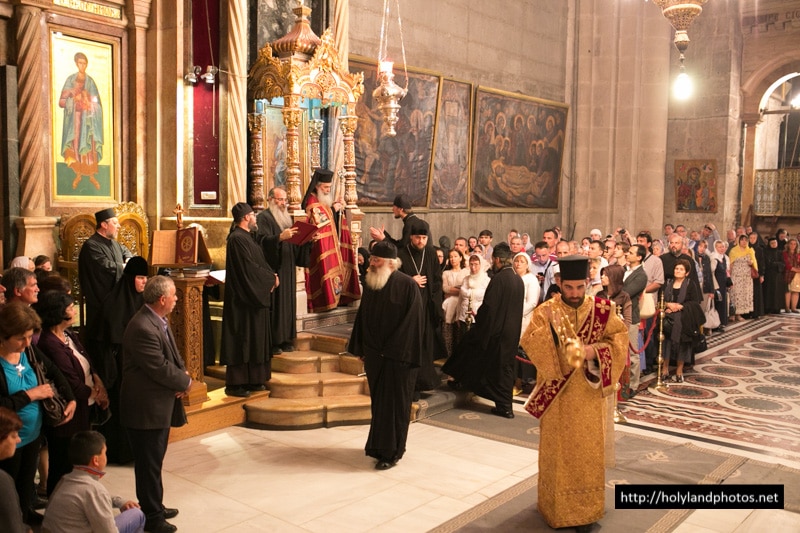 In the early hours of Sunday, the 21st of April/4th of May 2014, the Sunday of the Myrophorae, a Joint Patriarchal and Multi-Primatial Liturgy was conducted at the All-holy Church of the Resurrection and the Holy Sepulchre, on the occasion of the official visit to the Patriarchate of His Eminence Archbishop Leo of Finland.

The progression began, amidst bells ringing, from the gates of the Central Monastery to the Church of the Resurrection.

Upon entering the katholikon, the officiating Primate, Patriarch Theophilos of Jerusalem, put on a mantle and rose to the Throne.

Following hymns of the Ninth Ode, His Beatitude stepped into the Holy Bema, where he embraced the Archbishop of Finland and the other Prelates, whereupon they all put on their liturgical garments.

From there, they proceeded to the Holy Sepulchre, where the Joint Patriarchal and Multi-Primatial Liturgy began, led by His Beatitude Theophilos. Co-officiating were His Eminence Leo, Archbishop of Karelia and All Finland; the Most Reverend Isychios, Metropolitan of Kapitolias; their Eminences, Archbishops Dorotheos of Avila, Aristarchos of Constantina and Demetrios of Lydda; and Bishops visiting from the Church of Russia. Concelebrants were the Very Reverend Innocent, Bishop of Vladivostok; a crowd of hieromonks and priests, Archdeacon f. Evlogios and hierodeacon f. Agapios. The head-cantor of the Church of the Resurrection, Archimandrite Aristovoulos, sang with students at the Patriarchal School in Greek, Russian and Romanian, in the presence of the faithful, who also received Communion.

Before the conclusion of the Divine Liturgy, Patriarch Theophilos addressed Archbishop Leo in Greek.

The service was followed by a brief reception hosted by the Elder Sacristan, His Eminence Isidoros, Archbishop of Hierapolis.