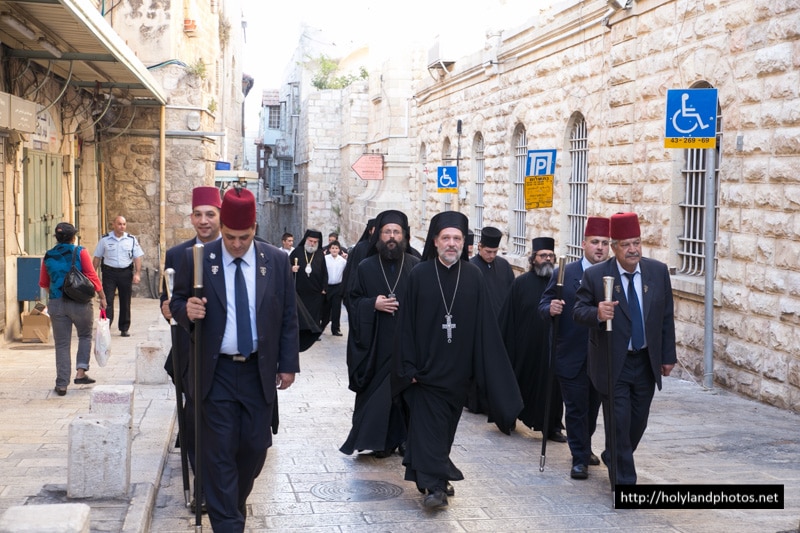 OFFICIAL VISIT OF THE ARCHBISHOP OF FINLAND TO THE PATRIARCHATE

On Tuesday the 16th/29th of April 2014, His Eminence, Archbishop Leo of Karelia and All Finland visited the Patriarchate of Jerusalem, accompanied by three clerics, a nun and a subdeacon.

Earlier on the same day, the Archbishop of Finland was welcomed at Ben Gurion Airport by the Most Reverend Isychios, Metropolitan of Kapitolias; His Eminence Theophylaktos, Archbishop of Jordan, and the Director of the Christian Affairs Department at the Israeli Ministry of Religious Affairs, Mr Cesar Margie.

At 6:00 pm of the same day, the Archbishop of Finland was officially welcomed at David’s Gate by the representative of the Patriarch of Jerusalem, Patriarchal Commissioner Isychios, Metropolitan of Kapitolias, and Hagiotaphite Fathers. Also present were representatives of the Christian Churches in Jerusalem, Mr Cesar Margie, the Finnish Ambassador to Israel, Mrs Leena-Kaisa Mikkola, and a crowd of Orthodox people.

From there, they walked to the Patriarchate to meet His Beatitude Theophilos and, amidst bells ringing, they proceeded to the All-holy Church of the Resurrection.

There, the two Prelates venerated at the Holy Apokathelosis whereas the Archbishop of Finland blessed the burned incense.

They went on to venerate at the Holy Sepulchre, where the Gospel of the Resurrection was read out in Finnish by the Archbishop of Finland.

From there they entered the Katholikon, where Doxology was performed.

After Doxology, His Beatitude made an address in Greek, reached here in English: https://en.jerusalem-patriarchate.info/2014/04/29/6588

The addresses were followed by veneration at the Holy Golgotha and return to the Patriarchates.

At the Patriarchates, His Beatitude the Patriarch of Jerusalem addressed the Archbishop of Finland in Greek, reached here in English: https://en.jerusalem-patriarchate.info/2014/04/29/6584

His Beatitude went on to decorate the Archbishop of Finland with the Grand Cross of the Knights Order of the Holy Sepulchre for His contribution to ecclesiastical life and the prevalence of justice and peace. He also offered Him a set of prelatic engolpiya, an icon of Theotokos and the book of Chrysostomos Papadopoulos on the Church of Jerusalem. Also offered were Jerusalemite icons to the members of His retinue.

Extending thanks for the decoration and reception, His Eminence the Archbishop of Finland offered His Beatitude a miraculous icon of Theotokos from the Monastery of Valamo of the Orthodox Church of Finland, bearing the name “Jerusalemite”.