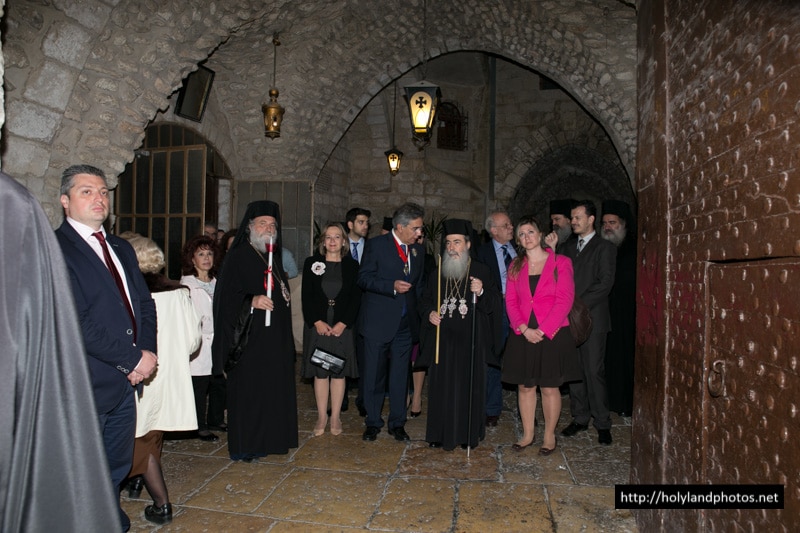 THE CEREMONY OF THE RESURRECTION AT THE PATRIARCHATE

pon their arrival, the Patriarchal Retinue proceeded through a dense crowd of pilgrims to the Katholikon. There, His Beatitude Theophilos, Patriarch of Jerusalem, rose to the throne while the Head Cantor of the Church, Archimandrite Aristovoulos, chanted the Canon of the Holy Saturday with his choir of students at the School of Sion.

During the 9th Ode of the Canon, His Beatitude stepped out of the Katholikon, for the procession to begin around the Holy Sepulchre. The procession was followed by Matins with the reading out of the Gospel of Mark: “When the Sabbath ended…”, “Christ Has Risen” and Easter Matins through the nine Odes, the Canon of the Resurrection.

The service was led by His Beatitude Theophilos. Co-officiating were the Most Reverend Isychios, Metropolitan of Kapitolias; their Eminences the Archbishops: Dorotheos of Avila, Aristarchos of Constantina, Methodios of Tabor and Theodosios of Sebaste; and Archbishop Theodosius, visiting from the Patriarchate of Serbia; Hieromonks and priests visiting from other Orthodox Churches; Archdeacon Evlogios and deacons Martyrios and Dionysios. Archimandrites Aristovoulos and f. Joseph of Mount Athos chanted in the Byzantine style, while the faithful participated in piety.

Before the Apolysis, His Beatitude read out the catechizing speech of St John Chrysostom: “He who is pious and devout…”

At the conclusion of the Divine Liturgy, priests offered the Holy Communion and the antidoron (blessed bread) to the congregation, whereas His Beatitude proceeded to the Central Monastery, where he was treated to cheese and Easter egg.