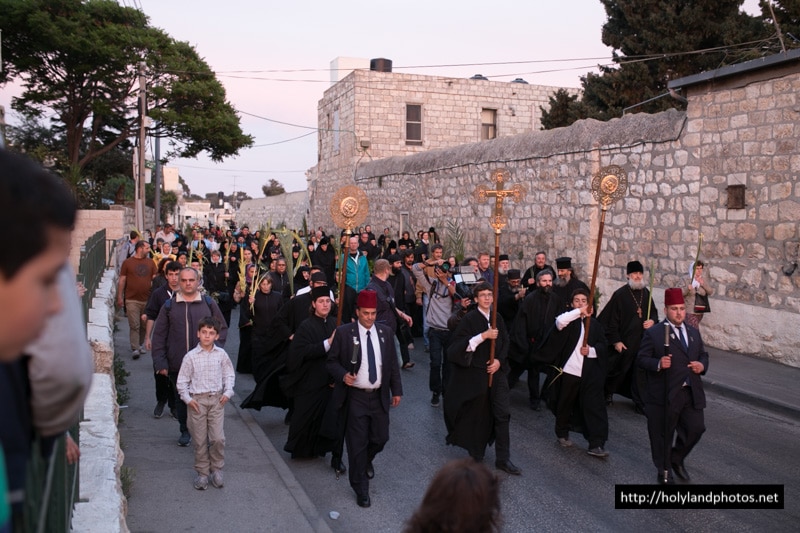 PALM SUNDAY AT THE PATRIARCHATE (2014)

On Sunday the 31st of March/13th of April 2014, namely Palm Sunday, the triumphal entry of the Lord into Jerusalem was commemorated by the Patriarchate, as the day when the children of the Jews chanted “Hosanna to the Son of David, blessed is He who cometh” and welcomed Him with branches of palm trees.

Vespers for the feast was held at 2 pm, first at the Church of Sts Constantine and Helen, where the 9th Hour was read out, followed by progression to the All-Holy Church of the Resurrection, amidst bells ringing.

After venerating at the interior of the Holy Sepulchre and at the Angel’s Stone, His Beatitude gave blessings and rose to the throne, while Prelates and members of the Synod venerated at the Golgotha, and Hierodeacons burnt incense along the holy shrines.

The Head Cantor of the Church of the Resurrection, Archimandrite Aristovoulos, chanted alongside Monk Joseph from Mount Athos. Vespers was led by His Beatitude Theophilos, Patriarch of Jerusalem, with Prelates co-praying from within the Holy Bema. At the conclusion of Vespers, the Patriarchal retinue proceeded to the Patriarchates.

At the conclusion of Vespers, most of the participating faithful ascended to Bethphage, on the Mount of Olives.

There, His Beatitude Theophilos blessed the branches at the Holy Monastery of Palm Sunday, founded by the late Archbishop Gregorios of Tiberias, and assigned Metropolitan Isychios of Kapitolias with leading the holy procession of the litany. The procession imitates the triumphal Entry of our Lord Jesus Christ into Jerusalem, “where the sons of the Jews chanted Hosanna to the Son of David, blessed is He who cometh”.

The procession began from Bethphage and passed through Gethsemane where the crowd held branches and chanted Palm Sunday troparia, before concluding in the direction of the Lions’ Gate or St Stephen’s Gate, at the Holy Monastery of St Anna, where it was dispersed.

On the day of the feast, at 07:00 am, the Patriarchal Retinue proceeded from the gates of the Central Monastery to the Church of the Resurrection through Christian Street.

Upon entrance into the Church and the Holy Bema through Golgotha, His Beatitude proceeded to venerate, as the Holy Sepulchre at that precise moment was held by the Franciscans, celebrating Easter concurrently with the Orthodox.

Once His Beatitude and the Prelates were dressed in prelatic attire, they proceeded to the area in front of the “Navel of the Earth” and the Divine Liturgy began.

The Divine Liturgy was led by His Beatitude Theophilos. Co-officiating was the Most Reverend Isychios, Metropolitan of Kapitolias; the Most Reverend George, Metropolitan of Nizhny-Novgorod and Arzamas, visiting from the Patriarchate of Russia; the Most Reverend Nikolaos, Metropolitan of Mesogaia and Lavreotiki, visiting from the Church of Greece; their Eminences Archbishops Theophanes of Gerassa, Dorotheos of Avila, Aristarchos of Constanina, Methodios of Tabor, Theodosios of Sebaste and Demetrios of Lydda; the Very Reverend Bishop Theodosios of Prizren, visiting from the Patriarchate of Serbia; and His Eminence the Archbishop of Vitebsk and Orsansk, also visiting from the Church of Russia. Also present were Hagiotaphite Archimandrites, Archdeacon Evlogios, deacons Martyrios, Dionysios and Timotheos from the Metropolis of Mesogaia and Lavreotiki. The Head Cantor of the Church of the Resurrection, Archimandrite Aristovoulos, chanted with Monk Joseph of Mount Athos in the presence of a large crowd of Orthodox from Russia, Greece, Cyprus, Ukraine and Romania. Attending the service was the Greek Consul-General to Jerusalem, Mr Georgios Zacharoudiakis and his esteemed wife.

At the conclusion of this magnificent Divine Liturgy, a procession began from the Holy Bema, moving thrice around the Holy Aedicula along the Holy Shrines before returning to the Holy Aedicula, where the Evangelic pericope was read out and a supplication was made.

There, His Beatitude addressed all those present in Greek.