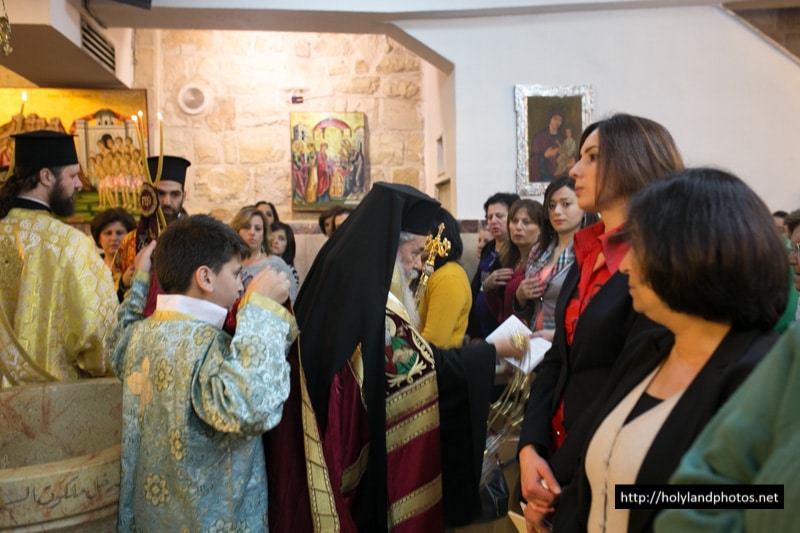 HIS BEATITUDE THE PATRIARCH OF JERUSALEM IN RAMALLAH

On the evening of Friday the 15th/28th of March 2014, His Beatitude Theophilos, our Father and Patriarch of Jerusalem, led the service for the Fourth Stasis of the Salutations to Theotokos in the Holy Church of the Transfiguration of the Saviour for the Rum Orthodox, Arab-speaking Community of Ramallah, of the Palestinian State.

In this big city of the Palestinian Autonomy, the Patriarchate maintains a Community numbering approximately seven thousand members. The head of the Community is Hagiotaphite Archimandrite f. Galaktion, aided by Steward f. Yacoub.

His Beatitude was warmly received by the Hegoumen, Archimandrite Galaktion, f. Yacoub, members of the Church Board and the faithful, before proceeding to lead the Salutations of the Fourth Stasis. Co-officiating were the Patriarchal Commissioner, the Most Reverend Isychios, Metropolitan of Kapitolias; the Elder Secretary-General, His Eminence Aristarchos, Archbishop of Constantina; Metropolitan Alexander of Pereyaslav-Khmeltnisky and Vishnevsky, visiting from Ukraine; the Very Reverend Archimandrite Ieronymos; Archdeacon Evlogios and deacon Dionysios.

The Canon of Joseph the Hymnographer “Let me open my mouth” was chanted by cantor f. Yusef Il-Far while a crowd of men and women accompanied him with piety.

Before the Apolysis, His Beatitude addressed the congregation in Arabic, see link:  https://en.jerusalem-patriarchate.info/ar/2014/04/28/4325

Subsequently, in honour of cantor Yusef Il-Far’s contribution and service to the Church, His Beatitude presented him with the Medal of the Holy Sepulchre.

During this pastoral visit, during which His Beatitude was informed of the problems facing the Ramallah Community, thanks were extended by Hegoumen Galaktion, Members of the Church Board and Mr Yusef Il-Far for the honour bestowed upon him.

On this occasion, His Beatitude offered the amount of ten thousand euro (€10.000) for the Community’s Students Fund.