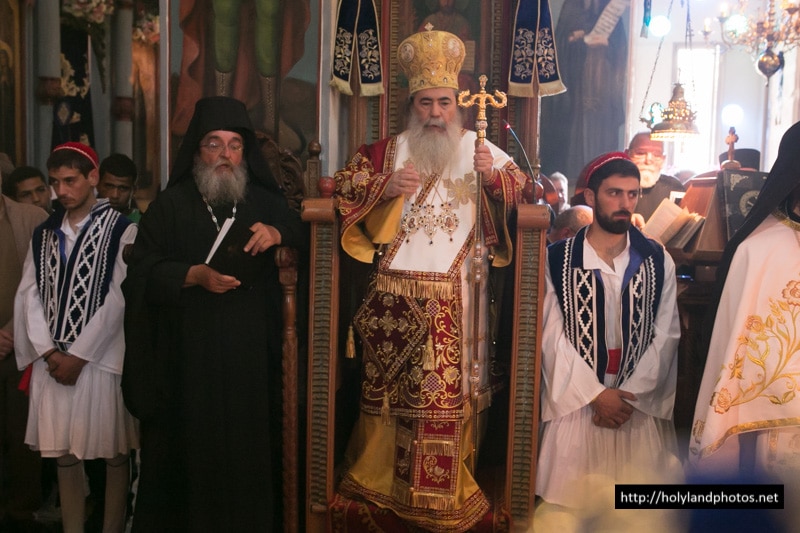 On Monday, the 4th/17th of March 2014, the memory of St Gerasimus of the Jordan was celebrated by the Patriarchate at the Monastery founded by him in the desert of the West Bank of the river Jordan.

The monastery was founded by Hosios Gerasimus in 451 AD, after he arrived to the Holy Land from his birthplace of Lycia in Asia Minor, and after having dwelt in Monasteries and hermitages of Palestine with Hosios Euthymius the Great and Hosios Kyriakos the Recluse.

In this Monastery he brought together a crowd of monks and other recluses who approached him in quest of spiritual guidance.

St Gerasimus was a proponent of the dogma of the Fourth Ecumenical Council in Chalcedon, which established the teaching of one hypostasis in two natures for our Lord Jesus Christ, and condemned the notion of one nature embraced to this day by the Churches of the Copts, Armenians, Syrians and Ethiopians.

This particular Monastery, which has sustained a series of raids, hosts several inhabitants of Jericho, as well as pilgrims, in facilities founded by the Hegoumen, Archimandrite Chrysostomos. Here, on the morning of the aforementioned day, His Beatitude Theophilos arrived in the company of the Most Reverend Metropolitans Isychios of Kapitolias, and Kyriakos of Nazareth; the Elder Secretary-General, Archbishop Aristarchos of Constantina; the Secretary of the Holy and Sacred Synod, Archbishop Demetrius of Lydda; Archimandrite Ieronymus and other Hagiotaphite Hieromonks; the Archdeacon, f. Evlogios, and Hierodeacon f. Dionysius.

Following a warm welcome, His Beatitude led the Liturgy of the Presanctified Gifts with co-officiating priests and deacons, in the presence of a great crowd of pilgrims, hailing mostly of Cyprus, the Greek Consul-General to Jerusalem, Mr Georgios Zacharoudiakis and his esteemed wife.

To this pious congregation His Beatitude preached the Word of God in Greek.

After the divine Liturgy, a procession took place around the Monastery, followed by meatless lunch offered by Archimandrite Chrysostomos to the Patriarchal Retinue and the faithful.