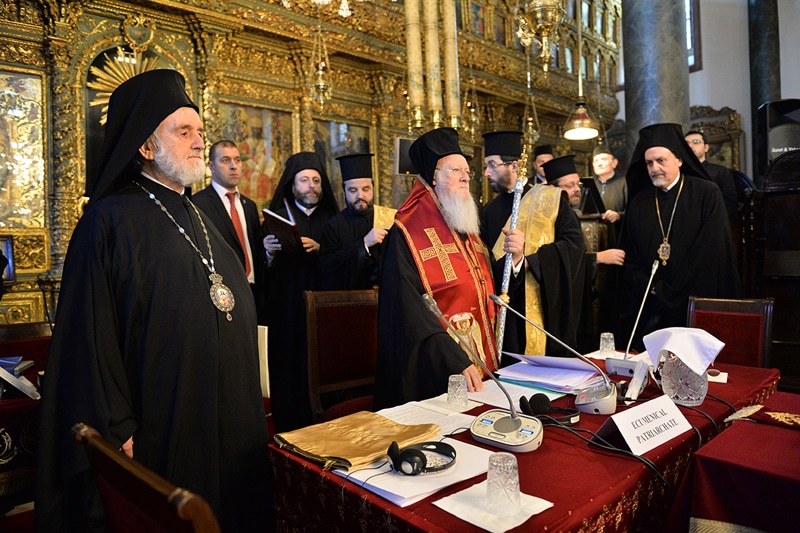 SECOND DAY OF PAN-ORTHODOX SYNAXIS AT THE PHANAR

During the proceedings of the afternoon of Thursday, the 21st of February/6th of March 2013, namely the first day of the Pan-Orthodox Synaxis, the Primates discussed the location of the Great Synod in Constantinople and in the Church of St Irene, where the Second Ecumenical Synod was convened. The decision-making process, by consensus or majority, was also discussed.

Deliberations on the aforementioned matters as well as on the matter of the number of Primates from each Church, continued during the second day of the Synaxis’ proceedings, namely on Friday the 22nd of February/7th of  March 2014, in the course of its morning session. The afternoon session was dedicated to the service of the Akathist Hymn, that is the First Stasis of the Salutations of Theotokos, in the church of the Great Archangels, officiated by His Beatitude Theodore II, Patriarch of Alexandria.

On the evening of the same day, the members of the Pan-Orthodox Synaxis were hosted to dinner at the Community Hall of the District of the Bosphorous, under the pastoral supervision of His Eminence Irinaios, Metropolitan of Myriofyton and Peristasis.

During the aforementioned dinner, His Beatitude Theophilos, Patriarch of Jerusalem, addressed the Primates with this speech:

This concluded the proceedings of the second day of the Pan-Orthodox Synaxis in Constantinople, namely Friday the 22nd of February/7th of March 2014.