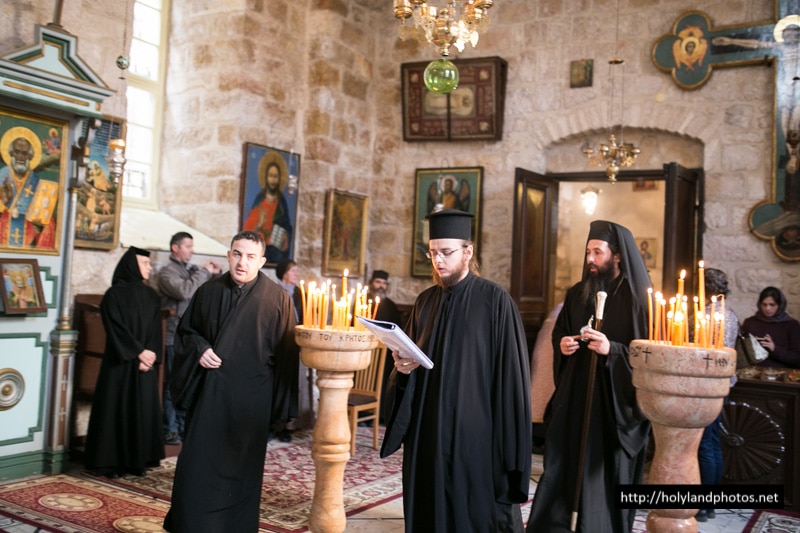 THE FEAST OF ST CHARALAMPOS AT THE PATRIARCHATE

On the Sunday of Carnival [Gr. Apokrias], namely the 10th/23rd of February 2014, the memory of the Holy Hieromartyr Charalampos, hailing from Magnesia, Thessaly, was celebrated by the Patriarchate. St Charalampos lived during the reign of Severus, when Lucian was Proconsul of Magnesia, in 198 AD.

In the Monastery dedicated to his name, adjacent to Northwest of the Church of the Resurrection, His Eminence Demetrios, Archbishop of Lydda and Secretary of the Holy and Sacred Synod, led the Vespers, the Matins and the Divine Liturgy. Co-officiating were Hagiotaphite Hieromonks and Hierodeacons, as well as a great crowd of faithful including Greeks from the Parish of Jerusalem, Arab-speaking, Greek-speaking and Russian-speaking pilgrims, praying in piety.

During the Divine Liturgy, His Beatitude Theophilos, our Father and Patriarch of Jerusalem proceeded to venerate in the company of Hagiotaphite Fathers.

Subsequently, the Patriarchal and Prelatic Retinue, as well as the faithful, were courteously hosted to a reception by the Hegoumen, the Very Reverend Archimandrite Kallistos, in his quarters.