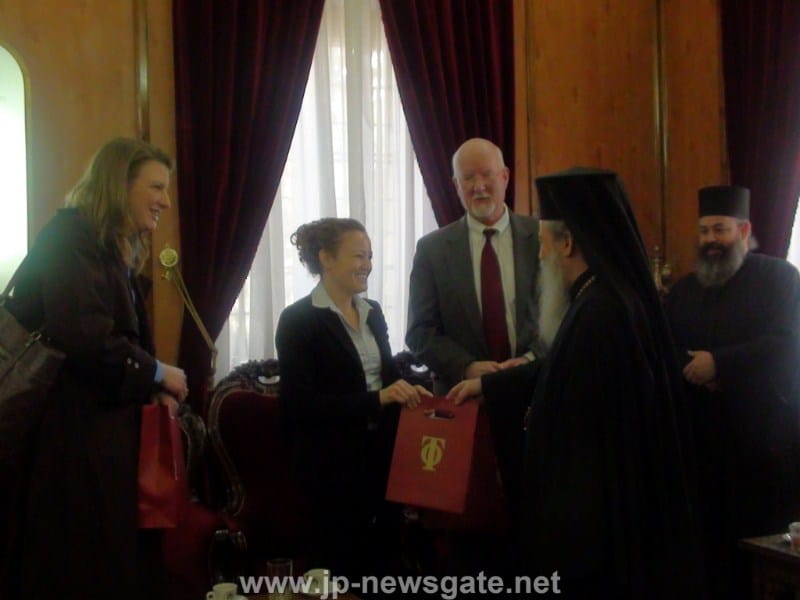 On Monday the 4th/17th of February 2014, Mr Shaun Casey, Special Advisor to Secretary of State John Kerry for Faith-based and Community Initiatives, representative of US President Obama and mediator in the peace negotiations between the Israelis and the Palestinians, visited the Patriarchate.

Mr Casey was received by His Beatitude Theophilos, our Father and Patriarch of Jerusalem.

The aim of Mr Casey’s visit was to bring His Beatitude up to date with the situation of Christians in the Holy Lands, the development of the peace negotiations and the scheduled visits of the Pope and the Ecumenical Patriarch.

His Beatitude talked to Mr Casey about the Patriarchate’s pastoral work through the centuries and also about its peaceful contribution to all governments since the days of the Byzantines, Omar Hatab, the Ottoman Empire, the Government of the British Mandate in Palestine, Jordan, Israel and the Palestinian Autonomy, to the present day; also about Jerusalem’s quest to serve as a city open to two peoples and to the adherents of three different religions.

His Beatitude also referred to the problems facing the Patriarchate on account of extreme religious people in its pilgrimage site on the Hill of St Sion.