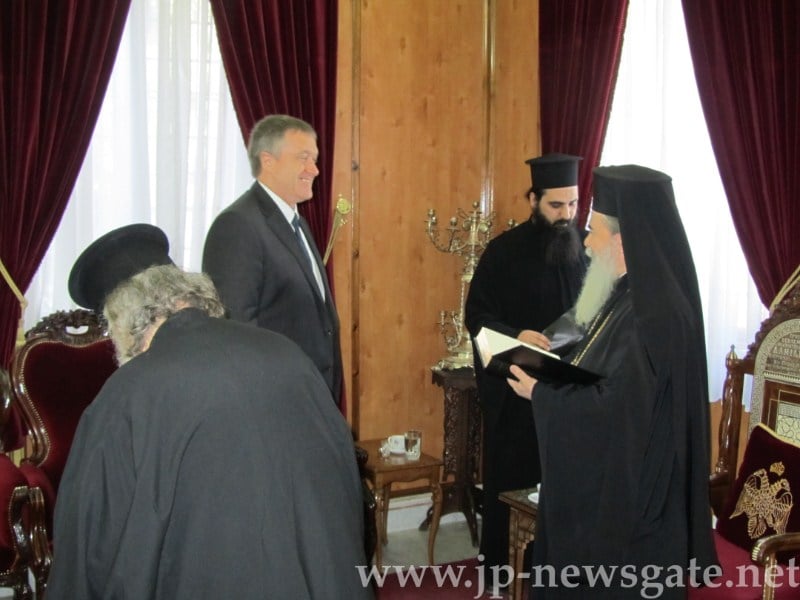 On Wednesday, the 23rd of January/5th of February 2014, the new Consul General of the United Kingdom to Jerusalem, Mr Alastair McPhail, visited the Patriarchate on the occasion of his appointment.

Mr McPhail was received by His Beatitude Theophilos, our Father and Patriarch of Jerusalem, in the presence of Hagiotaphite Fathers.

To Mr McPhail’s statement that he is happy and honoured to visit the Patriarchate, His Beatitude replied that he is equally happy, owing to the bilateral relations between the Patriarchate and the Great Britain and Anglican Church, especially in the days of the Government of the British Mandate of Palestine.

In the context of this visit, an interesting discussion took place on the peace initiative now being promoted in the Holy Land, in the benefit of Christians and all residents.

“The Patriarchate”, His Beatitude said, “with poise, wisdom, and prudence, faces challenges against it and brings peace to disputing political powers”.

“The Patriarchate struggles to preserve the sanctity of the Holy Land, of the status quo in Jerusalem, and the peaceful coexistence of adherents of all religions”.