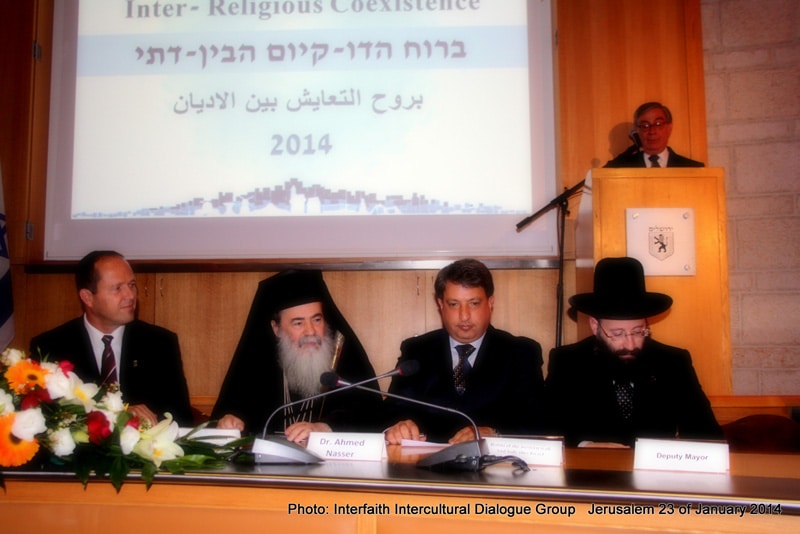 THE MAYOR OF JERUSALEM HOSTS EVENT FOR THE NEW YEAR

On Thursday the 10th/23rd of January 2014, a festive event took place to welcome the New Year 2014. The event was hosted by the City Hall of Jerusalem at its Hall of Events.

Invited at the event were the Heads of Christian Churches in Jerusalem, representatives of the Diplomatic Corps, the Police, the Muslim Community, Mukhtars, and civilians either residing in or visiting Jerusalem.

The Mayor of Jerusalem, Mr Nir Barkat, spoke on behalf of the Mayoralty, underlining the importance of Jerusalem as a historic and ecumenical city for the three religions – Judaism, Christianity and Islam – a city which has, through the centuries, attracted an increasing number of visitors and conveyed the message of peace.

The significance of the city’s call for a peaceful coexistence devoid of violence and aggressiveness was highlighted by other speakers too, i.e. the Consul of Costa Rica to Jerusalem, the rabbi of the Wailing Wall, Mr Samuel Rabinovic, the Mukhtar of Jerusalem and researcher Mr Ahmed Nasser.

On behalf of the Heads of Churches or their representatives, His Beatitude Theophilos, Patriarch of Jerusalem, addressed this multinational and multi-religious gathering with a speech in English, see: