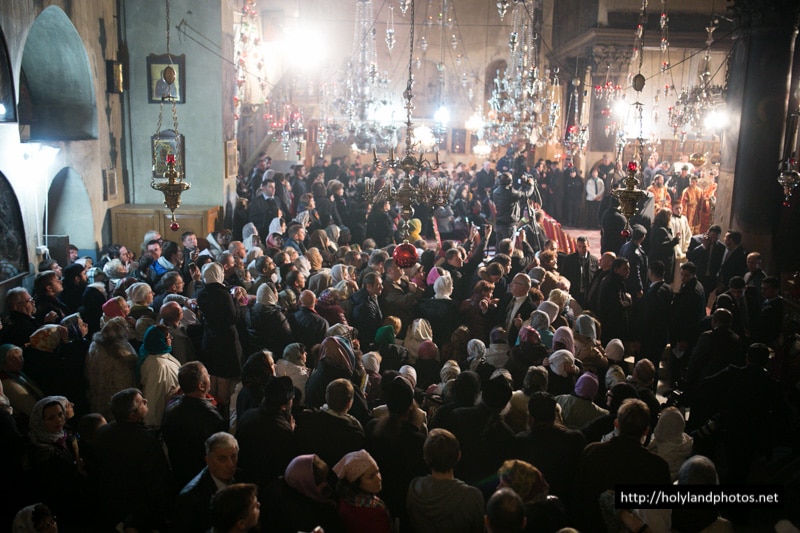 The feast of Christmas, the ‘Metropolis of all feasts’ according to the Church Fathers, was celebrated by the Patriarchate of Jerusalem on Tuesday the 25th of December/7th of January 2014, in the city where our Lord Jesus Christ was born by flesh, namely Bethlehem, where lies the magnificent Constantinian Basilica.

The feast began from Monday night, at 22:30 pm, as entrance was made from the gate of the Baptistery and the Matins procession was led by the Secretary of the Holy and Sacred Synod, His Eminence Demetrios, Archbishop of Lydda.

During Matins, His Beatitude Theophilos, Patriarch of Jerusalem, proceeded to the Holy Bema, while priests approached Him to put on their prelatic vestments, followed by deacons dressing His Beatitude and Primates.

This marked the beginning of the procession from the Sanctuary Door towards the divine Cavern, along which His Beatitude was accompanied by the President of the Palestinian Autonomy Mr Mahmud Abbas Abu Mazen, the representative of the King of Jordan, Commerce Minister Mr Samir Halasa, the Greek Consul-General to Jerusalem, Mr Georgios Zacharoudiakis, the Mayor of Bethlehem Mme Vera Baboun, Governor Mr Abdul Fatah Hamayel, the Chief of Police of the region of Bethlehem and other officials of the Palestinian state. Leading the procession were priests and Primates in festive vestments.

Upon entrance to the Cavern, the pericope of the birth of Jesus was read from the Gospel of Luke: “In those days Caesar Augustus issued a decree that a census should be taken of the entire Roman world…” (Luke 2,1) in both Greek and Arabic, followed by a reading of His Beatitude’s Message on the Feast of Christmas, by His Eminence Demetrios, Archbishop of Lydda in Greek and by presbyter Issa Musleh in Arabic.

The Message was followed by veneration at the Star and the Manger, as well as by a procession around the interior of the Basilica thrice, amidst Christmas Hymns under the direction of the Head Cantor of the Church of the Resurrection, Archimandrite Aristovoulos in Greek and the Director of the Choir of the Basilica of the Nativity Mr Laurence Samur, in Arabic. The two choirs went on to chant for the whole duration of Matins and the Divine Liturgy.

The procession was concluded in the middle of the Basilica, followed by the procession of Matins, and the Divine Liturgy of St John Chrysostom in the main Nave of the Basilica, led by His Beatitude Theophilos. Co-officiating were the Most Reverend Isychios, Metropolitan of Kapitolias, and their Eminences the Archbishops, Dorotheos of Avila, Aristarchos of Constantina, Elder Secretary-General, Methodios of Tabor, Theodosios of Sevasteia and Demetrios of Lydda, with Hagiotaphite Hieromonks and Arab-speaking presbyters, fathers Georgios Bandak, Georgios Martzuka, Spyridon Samour and Issa Thalgiye, visiting priests from Greece, Russia and other Orthodox countries, in the presence of a great crowd of Arab-speaking, Greek-speaking, Russian-Speaking and Romanian-speaking congregation, piously receiving the Holy Communion.

His Eminence Nektarios, Archbishop of Anthedon, led the Divine Liturgy in the Cavern.

At the conclusion of this brilliant celebration, the Patriarchal retinue proceeded to the Hegoumen’s Quarters where they were hosted to lunch by Archbishop Theophylaktos of Jordan.

After lunch, His Beatitude and Hagiotaphite Fathers returned to Jerusalem through the Checkpoint at Rachel’s Tomb, after first descending through the South gate to the Divine Cavern for veneration.