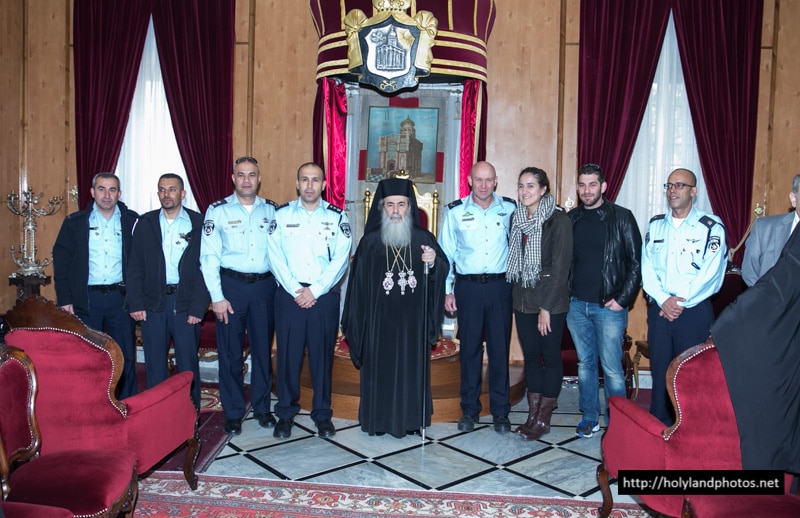 On Monday the 24th of December 2013/6th of January 2014, Christmas Eve was celebrated by the Patriarchate in Bethlehem in accordance with its ancient order.

In line with the approved schedule, at 9:00 am of the aforementioned day, His Beatitude Theophilos, our Father and Patriarch of Jerusalem, received the Israeli Police at the Patriarchate’s Hall on the occasion of the feast.

Subsequently, accompanied by the Police and headed by the Greek Orthodox Boy Scouts, the Patriarchal Hagiotaphite Retinue proceeded to the Gate of David. From there, His Beatitude and Hagiotaphite Fathers were driven to the Holy Monastery of the Prophet Elias.

At the Monastery, the Patriarchal Retinue was welcomed by the Hegoumen, Archimandrite Paisios, representatives of the Communities of Bethlehem, Beit-Jala, and Shepherds Village, as well as the Israeli Military Administration of Bethlehem. After a brief reception, His Beatitude left by car for Bethlehem, headed by a cavalcade of three Israelis until the Checkpoint at Rachel’s Tomb. From Rachel’s Tomb, an honorary motorcycle  parade of Palestinian Policemen led the Patriarchal car to the square of the city of Bethlehem, where His Beatitude was addressed by the Patriarchal Commissioner in Bethlehem, Archbishop Theophylaktos of Jordan, the Mayor of Bethlehem, Mme Vera Baboun, the Governor,  Abdul Fatah Hamayel, Minister Ziad Al-Bandak, the Palestinian Committee on Christian Affairs and a great crowd of Pilgrims and Christian residents of Bethlehem, headed by several Boy Scout Branches.

From there, His Beatitude walked to the entrance of the Basilica in Bethlehem, following Priests in festive vestments chanting “Your birth, O Christ our God, dawned the light of knowledge upon the earth…”

His Beatitude, led by the hieratical retinue, walked to the iconostasis of the Basilica, then descended to the Cavern through the southern gate to venerate the Star and the Manger, before ascending through the northern gate and proceeding in front of the iconostasis. There, he rose to the throne and led the Procession of the Great Hours, Vespers and the Divine Liturgy of Basil the Great until 3:30 pm.

At the conclusion of Vespers, the Patriarchal Retinue was hosted to lunch at the Hegoumen’s quarters, by Archbishop Theophylaktos of Jordan.

The reception marked the conclusion of the feast of Christmas Eve.