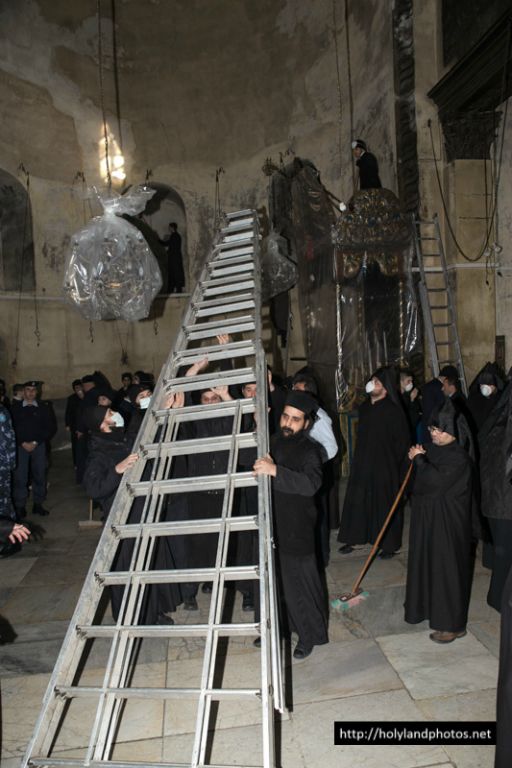 THE ANNUAL SWEEPING OF BETHLEHEM BASILICA, 2013

On Tuesday the 18th/31st of December 2013, the annual sweeping-cleaning of the Basilica of the Nativity in Bethlehem took place, according to the standing regime of veneration.

The responsibility for the aforementioned sweeping rests with the three Major Christian Communities, Greek-Orthodox, Franciscans and Armenians, in agreement with the local Government, thus this year with the Palestinian Government.

Participating in the sweeping on behalf of the Orthodox were most of the Hagiotaphite Fathers near and afar, serving in Bethlehem, and other servants, in the personal presence and guidance of His Beatitude Theophilos, our Father and Patriarch of Jerusalem.

Attending on behalf of the Palestinian Government were the President of the Committee of Christian Affairs, Mr Hanne Amire, Minister Mr Ziad Bandak, Minister Mme Hulud Deibas, the Mayor of Bethlehem, Mme Vera Baboun, the representative of the Palestinian state to Rome, Mr Issah Kasiye, the Prefect and the Police Director of the region of Bethlehem and his associates.

Each community, namely ours, the community of the Franciscans and that of the Armenians, went on to sweep the area determined by the veneration regime, the only difference to previous years being that this year the sweeping in the chapel used by the Armenians opposite the northern gate of the Cavern was performed simultaneously by Orthodox and Armenians, in the areas belonging to each according to the regime, and without any limitations as to the number of participating clerics.

With the help of God, the cooperation of the three Communities with the competent representatives of the Palestinian state, and mutual self-restraint, the sweeping was performed without any disagreements or arguments, peacefully and promptly.

Immediately after the sweeping, coffee was offered to the Franciscans, then the Armenians. Finally, a meatless lunch was hosted by the Hegoumen of the Pilgrimage Site, Archbishop Theophylaktos of Jordan, to His Beatitude, His Hagiotaphite retinue, Franciscans, Armenians, and to the Representatives of the Palestinian state and the Palestinian Police.