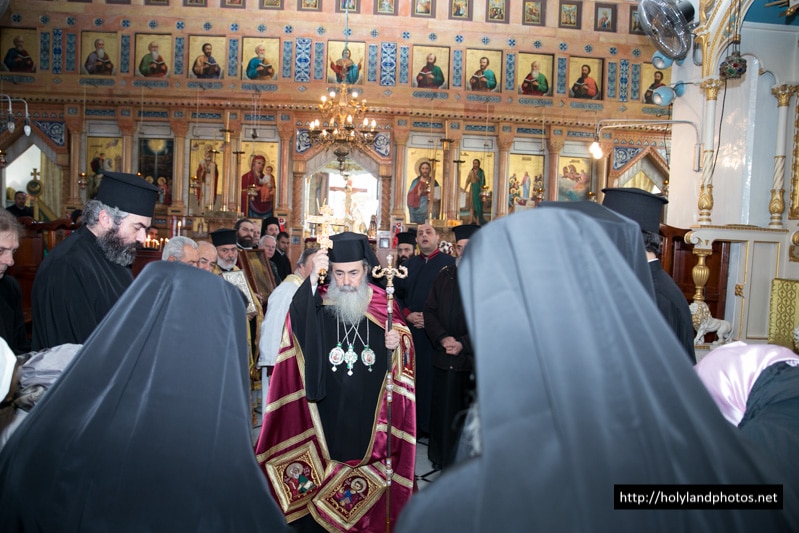 THE FEAST OF ST NIKOLAS AT THE PATRIARCHATE

On Thursday the 6th/19th of December 2013, the feast of St Nikolas the Wonderworker, Archbishop of Myra, Lycia, was celebrated at the church dedicated to him in the town of Bet-Jala, which lies between Jerusalem and Bethlehem, to the right of Rachel’s tomb on the way from Jerusalem to Bethlehem.

In this town, which numbers approximately fifteen thousand inhabitants, Christians and Muslims alike, the Patriarchate has always maintained a Greek Orthodox Arab-speaking community (Rum Orthodox), of about seven thousand members.

To this community, His Beatitude Theophilos, Patriarch of Jerusalem, arrived on the morning of the aforementioned day, and was received at the hegoumen’s quarters by Archimandrite f. Narkissos.

From there, His Beatitude proceeded to the Church of St Nikolas, where he was welcomed by priests at the entrance.

His Beatitude led the Matins service and the Divine Liturgy. Co-officiating were the Patriarchal Commissioner, the Most Reverend Isychios, Metropolitan of Kapitolias; the Elder Secretary-General, Archbishop Aristarchos of Constantina; the Patriarchal Commissioner in Bethlehem, His Eminence Theophylaktos, Archbishop of Jordan; and the Secretary of the Holy and Sacred Synod, His Eminence Demetrios, Archbishop of Lydda; the vicar priests of Bet-Jala, fathers Nikolaos, Georgios, Joseph and Paul; Archdeacon f. Evlogios and deacon f. Martyrios. The church choir chanted in the Byzantine style under the direction of Mr Ibrahim Karkar, in the presence of a great crowd of Orthodox faithful.

To this congregation His Beatitude preached the Word of God. This is an excerpt from His speech:

[…] “The great, indeed, gift that the Lord offered through His incarnate presence in the world, is the peace and the light of His theognosia, the knowledge of God. And Christ came”, says the Apostle Paul, “and preached peace to you who were far away, and peace to those who were near” (Ephes. 2, 17). And Jesus Christ says: “I am the light of the world. Whoever follows me will never walk in darkness, but will have the light of life” (Jn, 8, 12).

It is precisely of this light and peace of the mystery of the divine economy that our father Nikolaos became both a communicant and a teacher. […]

In other words, St Nikolas proved himself to be a true disciple of Christ, namely an apostle and preacher of His Gospel in the example of the Apostle Paul, who says:  “For what we preach is not ourselves, but Jesus Christ as Lord, and ourselves as your servants for Jesus’ sake.  For God, who said, “Let light shine out of darkness,” made his light shine in our hearts to give us the light of the knowledge of God’s glory displayed in the face of Christ” (II Cor. 4, 5-6).

And this we say, my dears, because our holy Hierarch had been in word and deed a fervent guardian and advocate of the pure and healthy teaching of the Gospel, which is the proper and salvaging, or better said, the healing faith of the one, Holy, Catholic and Apostolic Church; of the faith, we repeat, which was clearly inscribed by the Fathers of the Church, successors of the holy apostles, through the enlightenment of the Holy Spirit, in the first Ecumenical Synod which convened in Nicaea, Asia Minor, in 325 AD, under the great and pious emperor St Constantine the  Equal of the Apostles.

During this Ecumenical Synod, as is well known, Bishop Nikolaos of Myra, Lycia, bravely opposed the heretical teachings of Arius who in essence denied the divinity of the incarnate Logos, our Lord, Jesus Christ, from the pure blood of the Ever Virgin Mary. For this reason, St Nikolas was named the Canon of the Orthodox Faith, namely the Christian faith.”[…]

A great crowd proceeded to receive the holy Communion and the antidoron from the hands of His Beatitude, along with His blessings.

At the conclusion of the divine Liturgy, a procession took place around the Church and in the chapel of St Nikolas, specifically a cavern underneath the Church.

A reception followed at the hall of the Church, where the Patriarchal retinue and others were hosted to lunch offered by the hegoumen and the Bet-Jala Community Council.