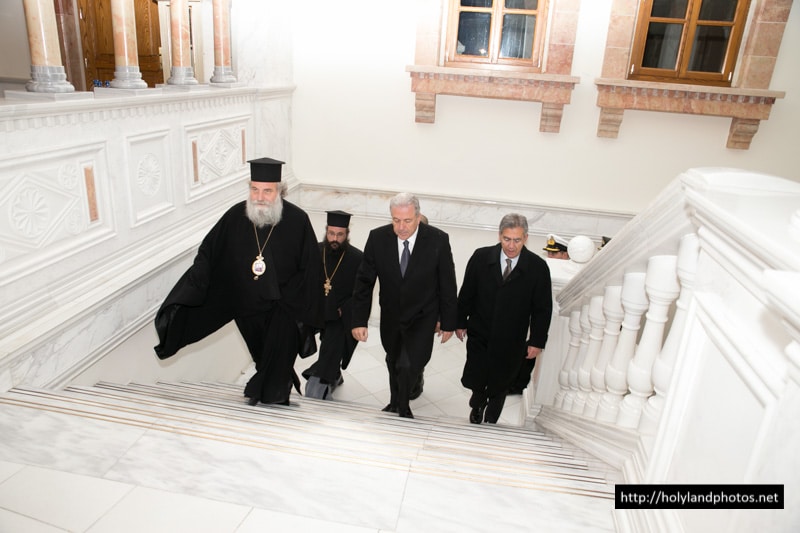 On Sunday the 2nd/15th of December 2013, the Minister of Defense of Greece, Mr Demetrios Avramopoulos, visited the Patriarchate in the context of a political visit to the state of Israel. Mr Avramopoulos was accompanied by his associates, political and military alike, Mr Aristeidis Kalogeropoulos, European Affairs Secretary, the Chief of the Hellenic National Defense General Staff, Mr Michael Kostarakos, the Greek Ambassador to Israel, Mr Spyridon Lambrides, and the Consul-General of Greece to Jerusalem, Mr Georgios Zacharoudiakis.

The Minister was warmly received by HB Theophilos, our Father and Patriarch of Jerusalem, in the company of Hagiotaphite members.

During his visit, the Minister told His Beatitude that “we are here at the Patriarchate with great love and respect for You, in order to receive Your wish and declare our support, because You have upgraded the representation of the Patriarchate, and brought peace to it; and for this we congratulate You”.

In His response, His Beatitude said “we happily welcome you as the representative of our country, Greece, the protector of the Patriarchate, of the Rum Orthodox in Israel, the Palestinian Autonomy, Jordan, and Qatar. This position of Greece was achieved owing to the efforts of the late Benedict, Patriarch of Jerusalem. The place of Christians as a religious entity in the Middle East is indeed crucial. For them, and for the future of Jerusalem, the role of the Patriarchate is of great importance. The Patriarchate preserves the religious and political status of Jerusalem. The sites of pilgrimage lie at the core of international interest”.

“As a result of its position, the Patriarchate is involved in the problems of the city of Jerusalem, yet being impartial itself, greatly contributes to their solution, drawing on its moral and material power and property”.

The Minister responded by expressing his joy over the upgraded level of life and action of the Patriarchate and its relations with the local authority.

In this framework, the Minister offered His Beatitude a silver box, whilst His Beatitude offered Mr Avramopoulos a large icon of Theotokos Jerusalemite, a mother-of-pearl representation of the Nativity, and the book “History of Jerusalem” by Chrysostomos Papadopoulos. The Minister’s associates were offered icons of the All-Holy Sepulchre and other Jerusalemite eulogias.

Seen out by His Beatitude, the Minister and his retinue continued on foot to venerate the All-Holy Sepulchre.