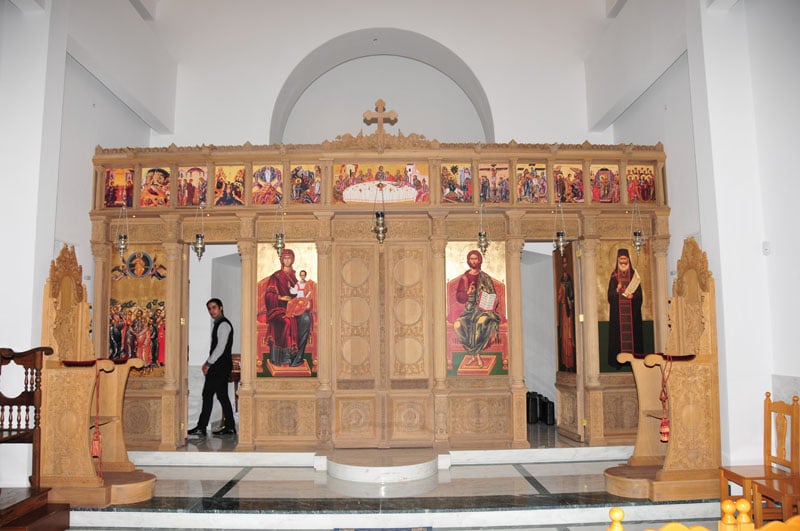 On the evening of Thursday the 15th/28th of November 2013, the “thyranoixia” ceremony, namely the opening of the doors, of the Holy Sepulchre Exarchy took place in the vicinity of the Archbishopric of Cyprus, in Nicosia.

The ceremony coincided with the eve of the commemoration of St Philoumenos the Hieromartyr, who suffered at martyr’s death near Jacob’s Well in 1979. By decision of the Holy and Sacred Synod of the Patriarchate of Jerusalem, St Philoumenos is commemorated on the day of his martyrdom, namely the 16th/29th of November each year.

The Exarchy of the All-Holy Sepulchre was erected almost from ruins and maintained owing to the approval of His Beatitude Chrysostomos, Archbishop of Cyprus, upon the blessing, support and protection of His Beatitude Theophilos, Patriarch of Jerusalem, the tireless efforts of the Most Reverend Timotheos, Metropolitan of Bostroi and Patriarchal representative to Cyprus, at the expense of pious benefactors – mostly the significant subvention of Mr Igor Altushkin, pious pilgrim.

Leading the ceremony of “thyranoixia” was the Most Reverend Metropolitan Timotheos, in the presence of the Reverend Gregorios, Bishop of Mesaoria; the Hagiotaphite Hegoumen of the Monastery of the Shepherds in Bet Sahur, Archimandrite Ignatius, acting as a representative of His Beatitude Theophilos, Patriarch of Jerusalem, and carrying a piece from the holy relics of St Philoumenos the Hieromartyr –the main church of the Exarchy being dedicated to the Ascension of the Lord, its chapel to St Philoumenos; the Most Reverend Chrysostomos, Metropolitan of Kyrenia, the Greek Ambassador to Cyprus, Mr Vasilios Papaioannou, representatives of the Nicosia Mayoralty, and a great crowd.

On the following day, Friday the 16th/29th of November 2013, the divine Liturgy was held, led by the Most Reverend Metropolitan of Bostroi. Co-officiating were Archimandrite Ignatius and priests from the Archbishopric and Bishoprics of Cyprus.

During the opening of the doors as well as in the course of the Divine Liturgy, the Most Reverend Metropolitan of Bostroi thanked the Lord for deeming us worthy to reach the “thyranoixia” ceremony, the Archbishopric of Cyprus, the Patriarchate of Jerusalem, benefactors, and the attending crowd, wishing that the inauguration ceremony be held soon in order for the Exarchy to operate fully as the link between two ancient apostolic Churches, those of Jerusalem and Cyprus, for the benefit of the two Churches and pious Cypriot pilgrims alike.