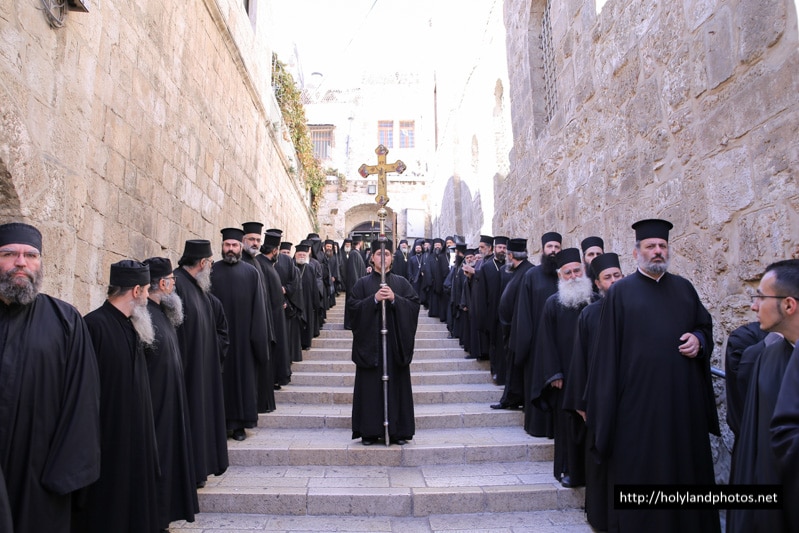 EIGHTH ANNIVERSARY OF THE ENTHRONEMENT OF PATRIARCH THEOPHILOS OF JERUSALEM

On Friday the 9th/22nd of November 2013, the eighth anniversary of His Beatitude Theophilos, our Father and Patriarch of Jerusalem, was celebrated by the Patriarchate.

On the occasion of the anniversary, a Doxology service was held in the All-Holy Church of the Resurrection.

His Beatitude led the service with co-officiating Hagiotaphite Prelates, Hieromonks and Presbyters of our congregation, visiting from Monasteries and parishes either near or remote, within the jurisdiction of the Patriarchate of Jerusalem.

Doxology was attended by the Greek Consul-General in Jerusalem, Mr Georgios Zacharoudiakis, joined by his associates and his honourable wife, as well as by local faithful and pilgrims.

At the end of the service, amidst the sound of church bells, the Patriarchal Retinue proceeded to the Patriarchates. There, according to the protocol, His Beatitude was greeted by the Elder Secretary-General Aristarchos, Archbishop of Constantina. In his greeting, the Elder Secretary-General referred to the deeper ecclesiastical importance of the Enthronement, as an event which ‘being an ecclesiastical act, it has, as a connecting link, brought together the separate members of the body of Christ and of the Church of Sion under a single power and authority, that of Your Beatitude, and from there on marked the continuation of its harmonious operation, as well as that of the Church as a whole. After all, in the word of the Apostle Paul, “If one part suffers, every part suffers with it; if one part is honoured, every part rejoices with it” (Corinthians A, 12, 26)

The Greek General-Consul, Mr Georgios Zacharoudiakis, addressed His Beatitude in Greek. This is an excerpt from his speech:

Greece, in recognition of Your personal contribution, and honouring its indissoluble ties with this sacred foundation, confers to You its full aid and unreserved support, embracing You with its trust. We remain Your helpers in Your indefatigable and unrelenting efforts. The recent visits of the country’s Prime Minister, the Vice-President of the Government and numerous Ministers and Officials, provide testament to this fact, and a proof of dedication to You, and of our non-negotiable and firm alignment with You and this sacred institution. […]

In His reply speech, His Beatitude thanked all those present. This is an excerpt from His speech:

[…] This venerable anniversary of the Patriarchal Enthronement in the seat of Christ’s reigning city, does not pertain only to our Mediocrity but also to our Christian community, the one within the ecclesiastical boundaries of Our spiritual jurisdiction.

This we say because the entire Universe, especially so our own region, is tried fiercely by both visible and invisible powers of the ruler of the darkness in this century (Ephesians, 6, 12) according to Paul. And because of this, humanity as a whole anticipates the safe haven of hope, Christ crucified and risen, “whom we, the humble, preach and acknowledge in piety and gratitude” in these natural sites of His redeeming work.“Because Christ is in you, the hope of glory”. (Colossians, 1, 27)

In this situation in which we were in when God called us (1 Corinthians, 7, 20) we are invited to prove ourselves worthy of our Hagiotaphite mission, “in purity, understanding, patience and kindness; in the Holy Spirit and in sincere love; in truthful speech and in the power of God; with weapons of righteousness in the right hand and in the left” (2 Corinthians, 6, 6-7).

His Beatitude’s address was translated into Arabic by the Patriarchate’s spokesman for Arab-speaking Mass Media, f. Issah Musleh.