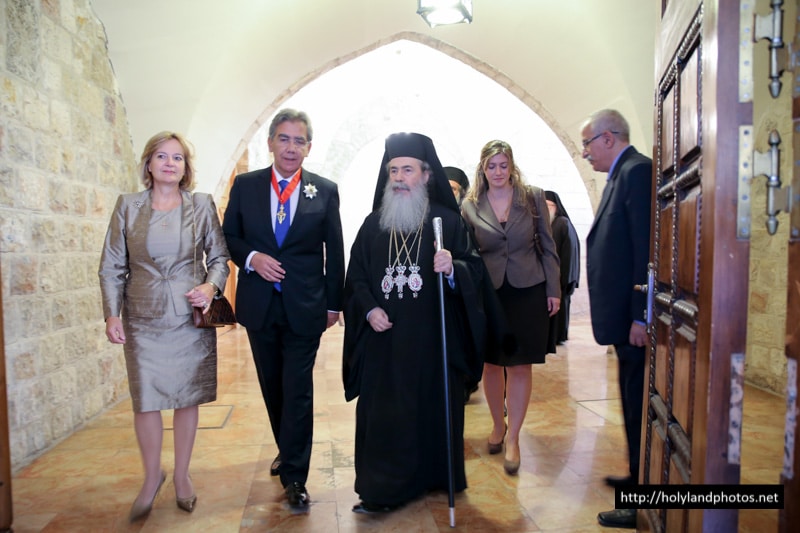 On Monday, the 15th/28th October 2013, at 10:30 am, Doxology was held in the All-Holy Church of the Resurrection on the occasion of the national holiday commemorating the 28th of October 1940.

Doxology was held as prayer of gratitude to God for empowering and reinforcing our nation to liberate itself from the occupying forces of World War II, and as supplication for forgiveness of the sins and repose of the souls of those who fought for their faith and homeland and those who fell heroically for the national cause and achieved the great feat of national liberation.

Doxology was led by His Beatitude Theophilos, Patriarch of Jerusalem. Co-officiating were Hagiotaphite Prelates and Hieromonks, in the presence of the Greek Consul-General in Jerusalem, Mr Georgios Zacharoudiakis, members of the Greek parish in Jerusalem and visiting pilgrims from Greece.

After doxology, attendants proceeded, amid ringing bells, to the Patriarchates where the Greek Consul-General made a speech pertaining to the national holiday (see video). His Beatitude addressed those present in Greek, while f. Issa Musleh translated into Arabic. An excerpt from the address is cited here:

“The present-day commemoration of the epos of 1940 is invested with particular significance in our contemporary and technologically advanced era. This we say as new forms of Nazism and Fascism threaten humanity, especially so those nations that are infused with the principles of the Gospel, love of Christ and the healing spirit of His Church, namely our Eastern Orthodox Church”.

The procession was transmitted live on the Patriarchate’s Radio Station, see: en.jerusalem-patriarchate.info/2012/12/26/2443