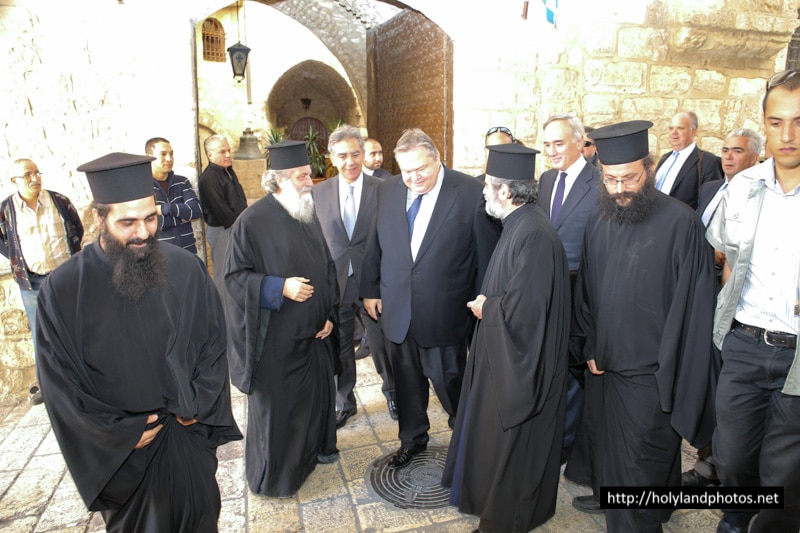 On Wednesday, the 26th of September/9th of October 2013, the President of PASOK, Foreign Secretary and Vice-President of the Greek Government, Mr Evangelos Venizelos, visited the Patriarchate while accompanying the Greek Prime Minister on a visit to the state of Israel.

Mr Evangelos Venizelos was warmly welcomed by His Beatitude Theophilos, our Father and Patriarch of Jerusalem, in the company of Hagiotaphite Fathers.

During his visit, Mr Venizelos informed His Beatitude that in the context of his meetings with the Prime Minister of Israel Mr Netanyahu, the President of the Palestianian Autonomy Mr Abu Mazen and, a few days earlier, with His Majesty the King of Jordan Abdullah II, special reference was made to the position and the role of the Patriarchate as a religious, peacemaking and regulatory agent for the preservation of the status of the sites of pilgrimage and of Jerusalem’s political status.

His Beatitude thanked the Vice President for his interest and added that, owing to its history and spiritual and physical property, the Patriarchate is elevated to a significant agent of peace and religious and political stability in the political context of its ecclesiastical jurisdiction, but at the same time and for the same reasons, it becomes on occasion a target on the grounds of its rights and property. In particular, His Beatitude referred to the now resolved problem of the water supply of the Church of the Resurrection on behalf of Israel’s Gihon Water Supply Company, and to the current problem of trespassing Patriarchal land in Bethany, for which solution is promoted by President Abu Mazen, with the support of the Greek Government.

In the context of this meeting, His Beatitude awarded Mr Venizelos the medal of the Supreme Commander of the Order of the Knights of the Holy Sepulchre for his contribution to the Church and the nation. He also offered him the book on the History of the Church of Jerusalem by Chrysostomos Papadopoulos, an icon of the Nativity, and Jerusalemite eulogias for his associates.

Moved, Mr Venizelos thanked His Beatitude and offered him a silver tray with representations from exhibits on display at the Benaki Museum.

Subsequently, Mr Venizelos and his associates proceeded to the Holy Sepulchre, where they were welcomed by His Eminence Isidoros, Archbishop of Hierapolis and Elder Sacristan, in the presence of Fathers of the Church of the Resurrection.