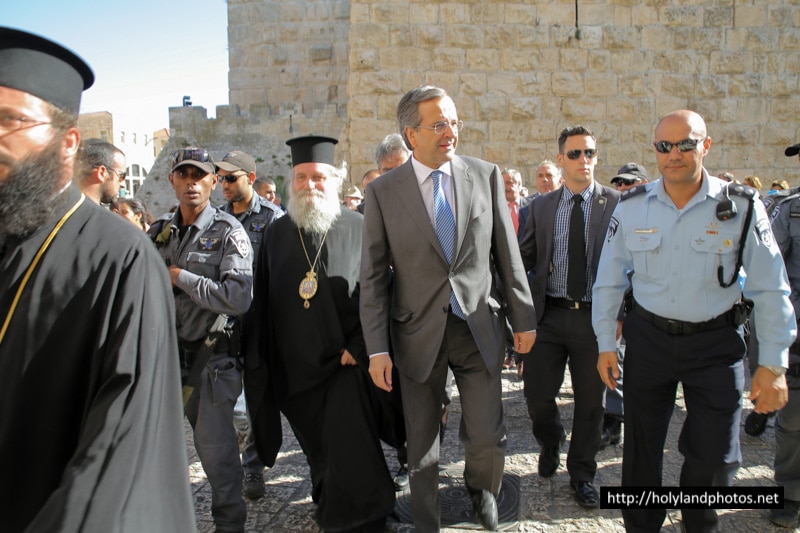 On the afternoon of Tuesday the 25th of September/8th of October 2013, the Greek Prime Minister, Mr Antonios Samaras, while on a visit to the state of Israel and the Palestinian Authority, visited the Patriarchate. The Prime Minister was accompanied by Ministers of his Cabinet, namely, Development Minister Mr Chatzidakis, the Minister of Education and Religious Affairs, Mr Arvanitopoulos, the Minister of Culture and Sports, Mr Panayiotopoulos, Environment Minister, Mr Maniatis, Tourism Minister, Mrs Kefalogiannis, Merchant Marine Minister, Mr Varvitsiotis and other government officials. Also present was the Consul General of Greece to Jerusalem, Mr Georgios Zacharoudiakis, and other associates.

The Prime Minister and his retinue were warmly received by members of the Greek Parish in Jerusalem, members of our Arab-speaking congregation, and several Hagiotaphite Fathers.

His Beatitude cordially welcomed the Greek Prime Minister in the Hall of the Patriarchate with an address in Greek.

He also decorated Mr Samaras with the Supreme Medal of the Order of Knights of the Holy Sepulchre, namely the Megalostavros, and offered him an elaborate icon of Theotokos Jerusalemite, an icon of the Nativity for his office, a cross for his wife, and eulogias for his retinue.

After signing the book of visitors, the Prime Minister left for the Church of the Resurrection, accompanied by His Beatitude, Hagiotaphite Fathers and several pilgrims.

There, Mr Samaras venerated the Apokathelosis, the Holy Sepulchre, the Katholikon and the Horrendous Golgotha, as well as the Wood from the Holy Cross at the office of His Eminence Isidoros, Archbishop of Hierapolis and Elder Sacristan. The latter offered Mr Samaras an icon of the Resurrection, for protection, assistance and success in his governmental tasks.

From there, the Prime Minister left amid good wishes for the rest of his mission.