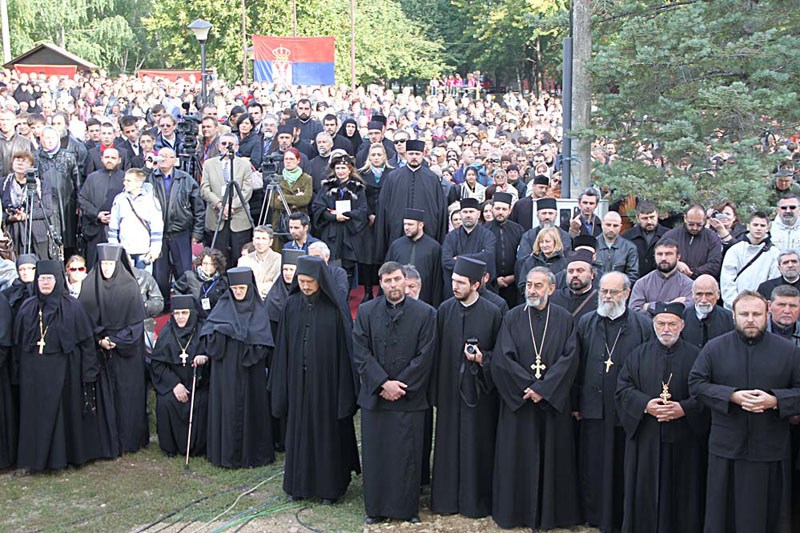 During the period between the 21st to the 25th of September/ 4th to 8th October 2013, the Patriarchate of Serbia celebrated the 1700th anniversary of the Edictum Mediolanense, issued by Constantine the Great (in 313 AD) who hailed from the ancient city of Naissos, namely present-day Nis, Serbia. The Edict of Milan allowed the Christian religion within the Roman state.

His Beatitude Theophilos, our Father and Patriarch of Jerusalem, accompanied by His Eminence Aristarchos, Archbishop of Constantina and Elder Secretary-General; His Eminence Makarios, Archbishop of Kattara, who had pursued theological studies in the Belgrade Faculty of Theology, and Archdeacon f. Athanasios.

His Beatitude and retinue, who arrived in Belgrade on the evening of Friday, the 21st of September/4th of October 2013, were received by His Beatitude Irinej, Patriarch of Serbia, in the presence of Prelates, Hieromonks and Hierodeacons.

During this warm reception, His Beatitude Irinej thanked His Beatitude Theophilos for accepting the invitation of the Church of Serbia to participate in the celebrations for the recognition of the Christian religion by means of the Edict of Milan, adding he was particularly happy about the pilgrims coming from the Holy Sepulchre.

In response, His Beatitude Theophilos extended His thanks for the warm reception and for the reason that, beyond the significance of the Edict of Milan for the Church and the world, the very meeting of the Heads of Orthodox Churches or their representatives was in itself significant for further tightening their relations.

In the meantime, His Beatitude Anastasios, Archbishop of Albania, arrived, and was cordially received by the Patriarchs of Serbia and Jerusalem, who were still at the airport with their respective Retinues.

On the following day, Saturday the 22nd of September/5th of October 2013, Doxology was held in honour of the event at the great and historical Cathedral of Sts Taxiarchai which stands in the center of Belgrade, opposite the Patriarchate.

During Doxology, the Patriarch of Serbia addressed the Heads of Churches and their retinues, whilst the Most Reverend Irinej, Metropolitan of Baska, translated into impeccable ancient Greek. The Patriarch underlined the importance of the work of Constantine the Great and of significance of the Edict issued by him, as well as the significance of the Gathering of the Heads of Churches in his birthplace of Nis, with the aim of working together towards the resolution of problems and for a broader fraternal society in favour of justice, love and unity in the world.

On behalf of the Heads of Churches spoke the Ecumenical Patriarch Bartholomew in Greek, whilst the Metropolitan of Baska translated into Serbian.

After the apolysis of the liturgy, a reception followed at the Patriarchate of Serbia.

From there, the Heads of Churches and their retinues visited the Serbian President, His Excellency Mr Tomislav Nicolic. Mr Nicolic expressed his joy over the celebrations held by the Church and the State of Serbia as well as for the Inter-Orthodox participation.

Following a short rest break, the Heads of Churches and their Retinues left for the city of Nis. After a three-hour drive, they held Doxology at the Cathedral of Sts Constantine and Helena in Nis.

On the morning of Sunday the 23rd of September/5th of October 2013, an Inter-Orthodox Patriarchal Joint Liturgy was held at the forecourt of the aforementioned Cathedral. Participating in the Joint Liturgy were thousands of pious Serbs, led by their President, Mr Tomislav Nicolic.

At the conclusion of the liturgy, Ecumenical Patriarch Bartholomew made a speech.

Lunch followed, during which each Primate made an address. The address of His Beatitude Theophilos may be read here in English: https://en.jerusalem-patriarchate.info/2013/10/11/3130

Due to pastoral requirements, namely the feast of St Thekla, His Beatitude left on the morning of Monday the 27th of September/ 7th of October 2013, whilst His Eminence Makarios, Archbishop of Kattara, undertook to represent the Patriarchate in the rest of the festive celebrations of the Church of Serbia.

From Belgrade, His Beatitude flew for Constantinople with Turkish Airlines and from there arrived in Jerusalem during the early hours of Monday the 24th of September/7th of October 2013, in order to lead the procession for the feast of St Thekla, Great Martyr and Equal to the Apostles.

HEADS OF THE CHURCHES IN JERUSALEM EXCHANGE CHRISTMAS GREETINGS

For the occasion of Christmas, new year and Epiphany, the Heads of Churches in Jerusalem...