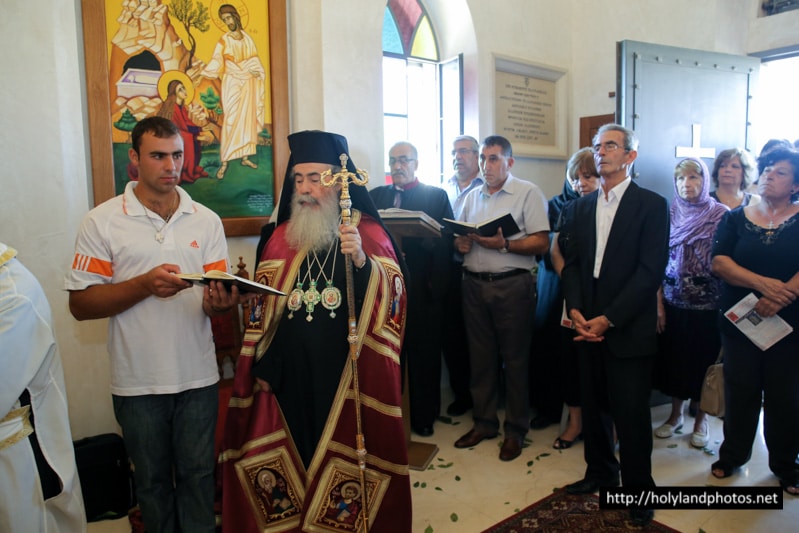 THE FEAST OF THE EXALTATION OF THE VENERABLE CROSS IN NAZARETH

On Sunday the 16th/29th of September, the Sunday after the Exaltation, the feast of the universal Exaltation of the Venerable Cross was celebrated in Nazareth. The feast was held at the chapel of the Holy Cross, which lies next to the estate of the Patriarchate, and is known as Qasr El-Mutran (Bishop’s Castle). The chapel was renovated a few years ago under the supervision of the Hegoumen of the Holy Monastery of Mount Tabor, Archimandrite f. Hilarion, and at the expense of a pious pilgrim from Greece.

H.B. Theophilos, Patriarchate of Jerusalem , led the Matins and the divine Liturgy. Co-officiating were the Most Venerable Kyriakos, Metropolitan of Nazareth; His Eminence Aristarchos, Archbishop of Constantina and Elder Secretary-General; the Patriarchal Commissioner in Bethlehem, His Eminence Theophylaktos, Archbishop of Jordan; the Hegoumens of Tabor Monastery, Archimandrite f. Hilarion and Tiberias Monastery, Archimandrite f. Timotheos; and the Arab-speaking Presbyter of the area of Nazareth, f. Ioannis Samaa. Members of the Arab-speaking Greek Orthodox Community (Rum Orthodox) of Nazareth participated in piety, chanting.

During the Koinonikon, H.B. preached the word of God.

Before the apolysis (conclusion) of the d. Liturgy, His Beatitude performed the procession of the Elevation of the Venerable Cross outdoors, raising the cross to the fourth points of the horizon so as to sanctify the faithful and the universe.

A small reception followed in the open area of the chapel, whilst lunch was hosted at the Metropolis by the Most Venerable Kyriakos, Metropolitan of Nazareth.