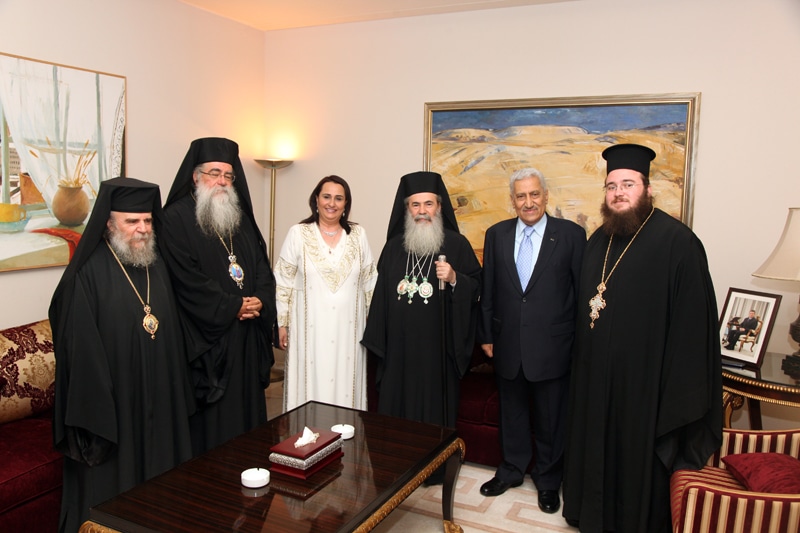 THE PRIME MINISTER OF JORDAN HOSTS THE PATRIARCH OF JERUSALEM

On the evening of Thursday, the 30th of August/12th of September 2013, the Prime Minister of Jordan, His Excellency Mr Abdullah Ensour, hosted a dinner in honour of His Beatitude Theophilos, Our Father and Patriarch of Jerusalem, at the Prime Minister’s residence in Amman.

Also invited to dinner were ministers and MPs of the Jordan Government, Christians in their majority. His Beatitude was accompanied by the Patriarchal Commissioner in Amman, the Most Reverend Benedict, Metropolitan of Philadelphia; the Elder Secretary-General Aristarchos, Archbishop of Constantina; the Patriarchal Commissioner in Northern Jordan, His Eminence Philoumenos, Archbishop of Pella, and Archimandrite Hieronymos, the Hegoumen of Fhes.

During dinner, the Prime Minister welcomed His Beatitude by pointing out that it is a joy and an honour for him, the Royal family and Jordan, to meet with the representative of all Christians in Jordan, Jerusalem and the Holy Land, and that this meeting, which has as participants Christian high-ranking government officials of Jordan, reflects very positively on the coexistence and cooperation between Muslims and Christians in Jordan.

Responding, His Beatitude addressed the Prime Minister with the following speech in Arabic:  https://en.jerusalem-patriarchate.info/ar/2013/09/12/2687