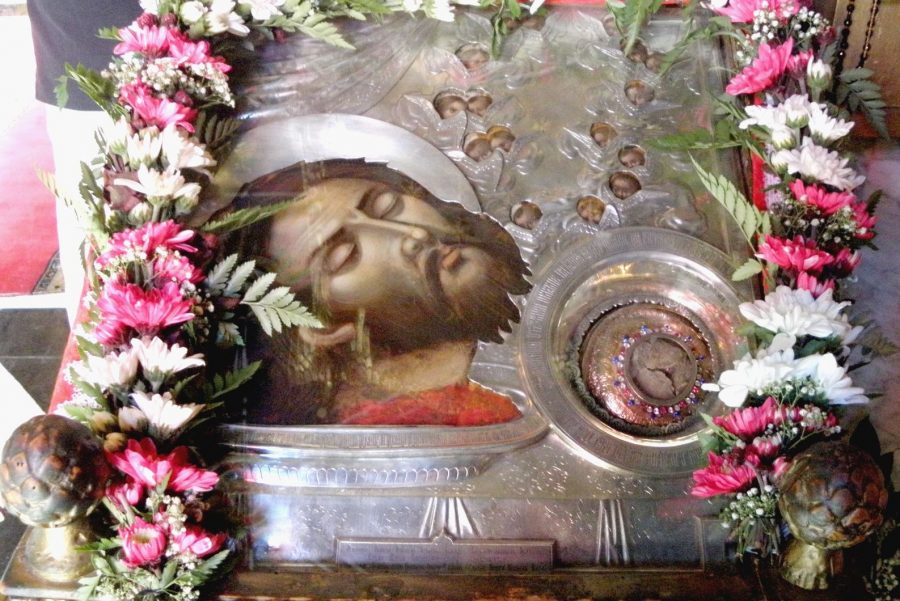 THE FEASTOF THE BEHEADING OF ST JOHN THE BAPTIST

On Wednesday the 29th of August/11th of September 2013, the Patriarchate commemorated the beheading of John the Baptist.

On the day of this venerable feast, a divine Liturgy was performed in the ancient church of St John the Baptist which lies in the Old City of Jerusalem, near the Church of the Resurrection. His Eminence Demetrios, Archbishop of Lydda, led the liturgy, with co-officiating Hieromonks and Deacons. Attending the liturgy were local pilgrims, monks, and the students of the School of Our Lady of Sion.

The Hegoumen, Archimandrite f. Nikodimos, preached to the pious congregation the Word of God on St John the Baptist, the “greater among those born of women” (Luke 7,28) as attested by the Lord; the “voice calling in the wilderness” (Mark 1, 3), the one “preparing the way of the Lord” (Matthew 3, 3), the one who said: “Behold, the Lamb of God, who takes away the sin of the world!”, the one who baptized the Lord (Mark 1, 9-12) and for the sake of prudence and justice died a martyr’s death (Matthew 14, 4) by beheading and whose head was “brought in on a platter” (Matthew 14, 11).

At the conclusion of the divine Liturgy, the hegoumen, Archimandrite f. Nikodimos, hosted a reception for the Prelatic retinue and the congregation.

During the divine Liturgy, His Beatitude Theophilos, Our Father and Patriarch of Jerusalem, visited the Church in the company of Brothers of the Holy Sepulchre for veneration.

On the same day, before noon, His Beatitude, accompanied by the Elder Secretary-General, Archbishop of Constantina, Aristarchos, visited the Holy Monastery of John the Baptist on the river Jordan, where the Hegoumen of the adjacent Monastery of Abba Gerasimus, Archimandrite f. Chrysostomos, had just completed the liturgy. There, His Beatitude was informed by the architect of the Church of the Resurrection, Mr Theodosios Mitropoulos, on the progress of maintenance and renovation works carried out there after damages caused during the six-day war. These works are underway upon financial aid provided by the Hegoumen of the Holy Monastery of Mount Sarantarion, Archimandrite f. Gerasimos.

Subsequently, His Beatitude visited the Holy Monastery of Abba Gerasimus, where he was informed on the works carried out there under the supervision of the Hegoumen, Archimandrite f. Chrysostomos.