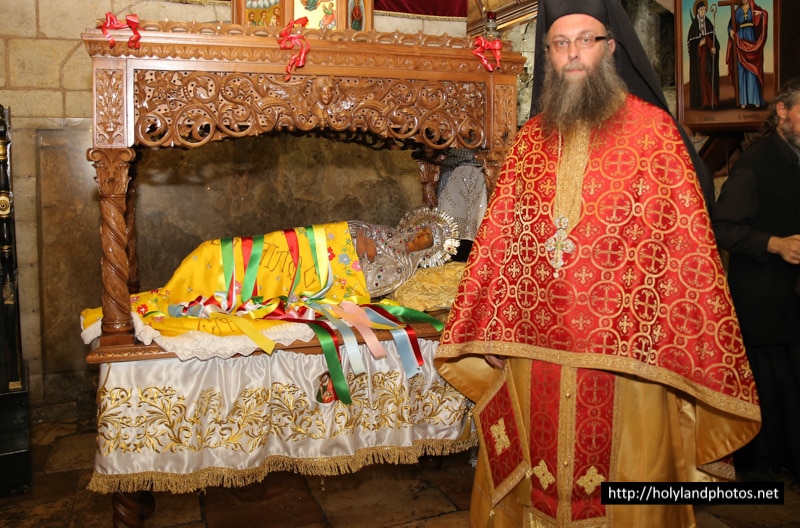 APODOSIS OF THE DORMITION – THE ASCENT OF THE ICON OF THEOTOKOS

On Thursday the 23rd of August/5th September 2013, the Patriarchate of Jerusalem celebrated the Apodosis of the feast of the Dormition of Theotokos, namely the completion of an eight-day span during which troparia of this feast dedicated to the Mother of God were chanted.

On the day of the Apodosis (Leave-Taking), in accordance with the order of the Patriarchate of Jerusalem, the icon of the Dormition of Theotokos, which was kept next to the Bier of the Mother of God, was transferred in procession, at the conclusion of the Divine Liturgy, held to the chest of the Hegoumen of Gethsemane, Archimandrite f. Nektarios.

The procession embarked from the Bier of the Mother of God and paused for supplications before the Monasteries of St Stephanos extra muros, of the holy parents of Mary, Joachim and Anna, the Praetorium, St Charalambos and Seidanaya intra muros. On both sides of the adorned streets of this route, local faithful and pilgrims, mainly Orthodox but also followers of other Christian dogmas, would piously venerate the icon of Theotokos.

At the junction of Christian street and the Patriarchate street, the procession stopped for supplication, upon which His Beatitude Theophilos, Our Father and Patriarchate of Jerusalem, together with Fathers of the Holy Sepulchre, approached for veneration.

Carrying on along Christian street, the procession arrived at the court of the Church of the Resurrection, where a supplication was made, before terminating at the Chapel across the street, the Dependency of Gethsemane. There it was placed in order to protect both the Chapel and the Brotherhood of the Holy Sepulchre, guardians of the All-Holy Pilgrimage Sites.