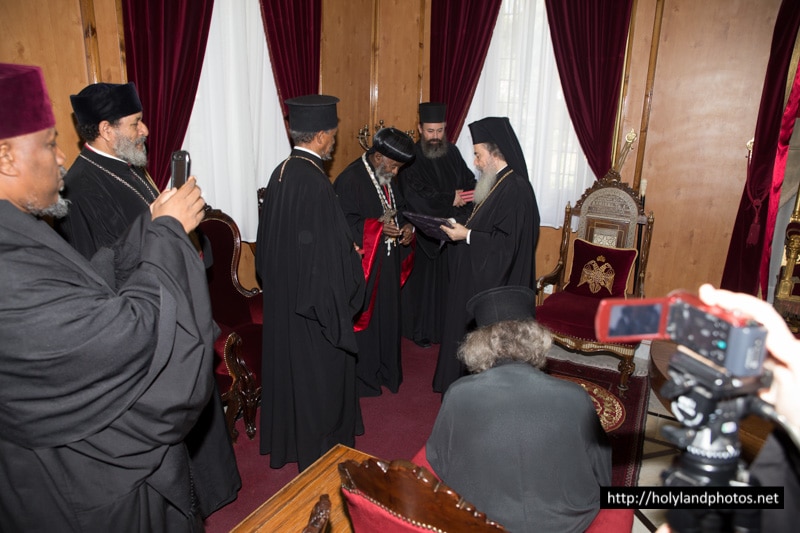 On Friday the 17th/30th of August 2013, the new Archbishop of the Ethiopian Church in Jerusalem, Mr Daniel Ilma, visited the Patriarchate upon assuming office after the election of his predecessor, Archbishop Aba Mattias, as Patriarch of Ethiopia.

The new Ethiopian Archbishop was received by His Beatitude Theophilos, our Father and Patriarch of Jerusalem, in the presence of Fathers of the Holy Sepulchre.

During the Archbishop’s visit, a discussion took place on the ancient ties between the Ethiopian and Greek peoples since the years before Christ, and on the generally harmonious relation that links the Ethiopian Church and the Patriarchate of Jerusalem. Among further topics discussed were the peaceful coexistence between Ethiopians and Greeks in the area of the Church of the Resurrection and the Monastery of Abraham, and the willingness and ability of our Patriarchate to help the Ethiopians resolve certain problems troubling them in their Monastery, known as Dabre Seltan, situated on the roof of the Church of the Resurrection.

In the context of the meeting, His Beatitude offered the Ethiopian Archbishop an ivory engolpion (icon worn on the chest) and cross, and the “History of the Church of Jerusalem” by Chrysostomos Papadopoulos, wishing him a peaceful and fruitful tenure as Archbishop.