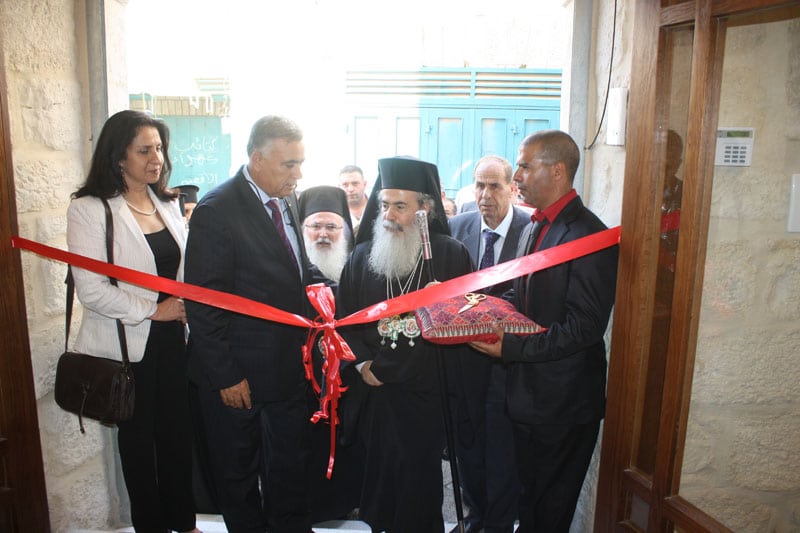 On Tuesday the 16th/29th of August 2013, the Spiritual Center of the Bethlehem Pilgrimage was officially inaugurated.

The Center is set up at a residence near the Basilica of the Nativity, and the Central Monastery of the Greek Orthodox located within. The residence was purchased and renovated by the Patriarchal Commissioner in Bethlehem, His Eminence Theophylaktos, Archbishop of Jordan.

The Center is intended to include various teaching and educational departments for the youth of the Arab-speaking congregation in Bethlehem (Rum Orthodox), i.e. courses on the History of the Holy Land, the Church of Jerusalem, the Holy Sites, Byzantine Music, computer literacy, foreign languages etc.

By means of these courses and other events to be hosted at the Center, young people will have the opportunity to meet and communicate with one another, overcoming isolation and alienation caused by the unstable political situation and financial adversities facing both Bethlehem and its environs.

The administration of the Center shall be undertaken by His Eminence Theophylaktos, Archbishop of Jordan, alongside selected associates from the Bethlehem congregation, i.e. theologian Mr Jandala Masri, and Mr Georgios Kharan with the blessing, approval and guidance of His Beatitude Theophilos and of the Holy and Sacred Synod.

The inauguration ceremony was preceded by a meeting of the heads of the three Communities – Greek Orthodox, Franciscan and Armenian – at the Bethlehem office of the President of the Palestinian Authority, Mr Mahmoud Abbas – Abu Mazen, with his representatives, focused on working together on the manner in which officials and pilgrims will be received at the Basilica of the Nativity in Bethlehem.

Subsequently, the Patriarchal Commissioner in Bethlehem, Theophylaktos, hosted lunch for His Beatitude and retinue, as well as for high-ranked officials of the Palestinian Authority, Sheiks of the region, Mr George Bassus and to approximately two hundred members of our congregation in Bethlehem and other communities.

Lunch was followed by the Center’s opening ceremony and the blessing of the water by His Beatitude.

On this very significant event for the life of our Greek Orthodox Community and all towns in Bethlehem, His Beatitude made a speech in Arabic which may be read here https://en.jerusalem-patriarchate.info/ar/2013/08/28/2662 wishing success of the Center’s objectives for the benefit of those partaking in its activities.

At the conclusion of His speech, His Beatitude was given a letter by the Judicial Assembly of the Palestinian Authority addressed to President Abu Mazen, wherein His Beatitude is praised for His cooperation towards peace, inter-religious coexistence and contribution to the Palestinian people. The letter, in Arabic, may be read here: https://en.jerusalem-patriarchate.info/ar/2013/08/28/2665

Upon leaving the Center, His Beatitude consecrated the Chapel of the Holy Innocents near the Basilica, recently renovated by Theophylaktos, Archbishop of Jordan.