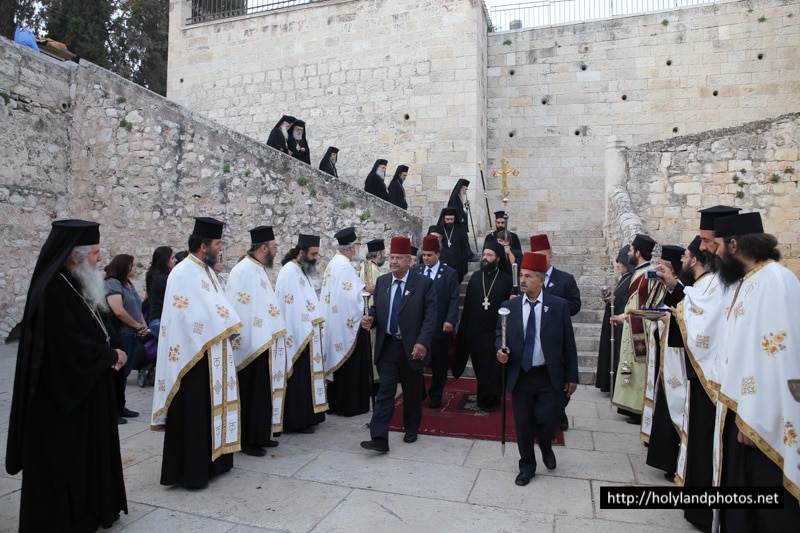 THE FEAST OF THE DORMITION OF THEOTOKOS AT THE PATRIARCHATE

On Wednesday the 15th/28th of August 2013, the feast of the Dormition of Theotokos was celebrated by the Patriarchate of Jerusalem at the Bier of the Mother of God.

Vespers was first held on the evening of the feast, led by the Most Reverend Joachim, Metropolitan of Zambia at the Patriarchate of Alexandria. The cantor of the Church of the Resurrection, Archimandrite f. Aristovoulos chanted the Vespers’ troparia in the Byzantine mode, especially so the Doxastikon “With a sign by the authority of God” within the eight modes (octoechos), whilst the faithful people piously observed, placing lit candles along the steps of the church.

On the morning of the feast, the Divine Liturgy was officiated at the Bier of the Mother of God, His Beatitude Theophilos, Our Father and Patriarch of Jerusalem, officiating. Co-officiating were the Most Reverend Metropolitans, Isychios of Kapitolias, Patriarchal Commissioner; Timotheos of Vostroi; the Most Reverend Joachim, visiting Metropolitan of Zambia, and their Eminences, Aristarchos, Archbishop of Constanina, and Methodios of Tabor; Hieromonks of the Holy Sepulchre and visiting priests from the Holiest Sister Orthodox Churches of Russia, Greece, Cyprus, Ukraine and Belarus. The choir chanted under the direction of Archimandrite Aristovoulos in Greek and Mukhtar George Kamar in Arabic, in the presence of the Greek Consul-General in Jerusalem, Mr Georgios Zacharoudiakis and his wife, and also Ms Aspasia Mitsi. A great crowd participated devoutly and venerated the Bier of the Mother of God, consecrating their hands, lips, eyes and foreheads.

During the Koinonikon of the Divine Liturgy, His Beatitude preached the Word of God in Greek.

At the dismissal of the divine Liturgy, the Patriarchal retinue and members of the personnel were hosted at the Hegoumen’s Quarters by the Hegoumen, Archimandrite f. Nektarios.