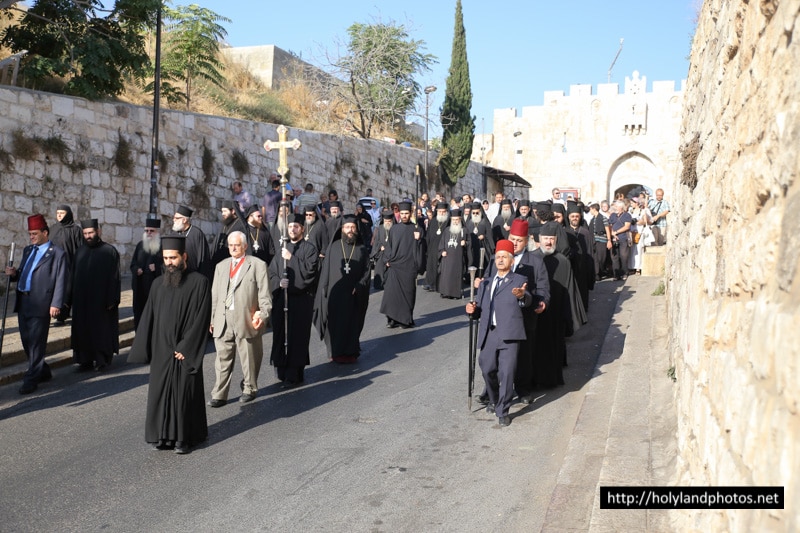 THE RITE OF THE LAMENTATIONS OF THEOTOKOS IN GETHSEMANE

On Tuesday the 14th/27th of August 2013, the rite of the Lamentations or the Epitaph of Theotokos was performed by the Patriarchate at the Bier of the Mother of God in Gethsemane.

An attendance of Fathers of the Holy Sepulchre with sojourner clerics of the Church of Greece and other Orthodox Churches, led by His Beatitude Theophilos, Our Father and Patriarch of Jerusalem, commenced at 6:30 am from the Gate of the Patriarchate. Moving across the Via Dolorosa and passing before the Holy Monasteries of Praetorium, St Anne and St Stephanos they arrived at Gethsemane.

Once there, His Beatitude and Prelates waited at the Hegoumen’s Quarters for the priests to descend into the Holy Church, pay their respects, and put on the appropriate vestments for the rite.

Subsequently, His Beatitude proceeded down to the court of the Church of the Dormition of Theotokos and, in the presence of appropriately attired priests, holding the Gospel, cross and censer He put on a patriarchal mantle and blessed the Holy Entrance.

Immediately afterwards, the hieratic procession walked towards the Bier of the Mother of God, whilst chanters sang “In Giving Birth You Kept Your Virginity”.

Having venerated the Bier of the Mother of God, His Beatitude was dressed in full primatial vestments, whilst the Prelates wore a stole and a pallium, and the priests a stole. Then, the procession of the Lamentations began in three stases: A’: “The Pure One in the tomb”, B’ “Worthy it is to praise you, Theotokos”, and C’: “All generations offer a song unto your burial, O Virgin”, with the Evlogitaria at the end.

Within the troparia of these stases, Theotokos was praised for having conceived the Lord through Spirit, having raised him in obedience and devotion until the passion on the cross as the first Myrrh-bearing witness of the Resurrection, and as having slept a natural death and been buried in her tomb in Gethesemane, then taken by her Son to Heaven in soul and body, to stand on his right and offer supplication and protection to those piously invoking her. These theological and devout hymns were received in great piety by a crowd of the Lord, co-chanting on occasion.

Attentively the crowd also listened to the Word of God delivered by the sojourner Metropolitan of the Church of Greece, the Most Reverend Theologos, Metropolitan of Serres (available through the audiovisual material cited below), on Theotokos as mother of the Lord and eternal mediator before her Son on behalf of each and every faithful Christian Orthodox, and equally for the faithful of our Nation, suffering gravely at present because of the financial crisis from which he wished that we exit through the intercession of Theotokos.

At the conclusion of the sermon, the priests who carried the Epitaph in which the icon of the body of Theotokos was placed, climbed the stairs next to the Gate of the Church. There, a supplication was made for the pilgrims of the All-Holy and Life-Giving Sepulchre and of the Bier of the Mother of God, as well as for peace, health and kind condition for the whole world.

The priests went on to lower the Epitaph into the area behind the Bier of the Mother of God and in front of the icon of the Platytera, known as “Ierosolymitissa”, where a supplication was made and the Patriarchal Polychronism chanted. The dismissal of the rite of the Lamentations followed, whilst even after the dismissal the crowd was eager to venerate the sacred icon.

Subsequently, the Patriarchal retinue and the people of the Lord were received at the Hegoumen’s Quarters by the Hegoumen of Gethsemane, Archimandrite f. Nektarios, where they were offered cold water, lenten cakes and nuts in the presence of the Consul-General of Greece in Jerusalem, Mr Georgios Zacharoudiakis, and personnel from the Greek Consulate General.