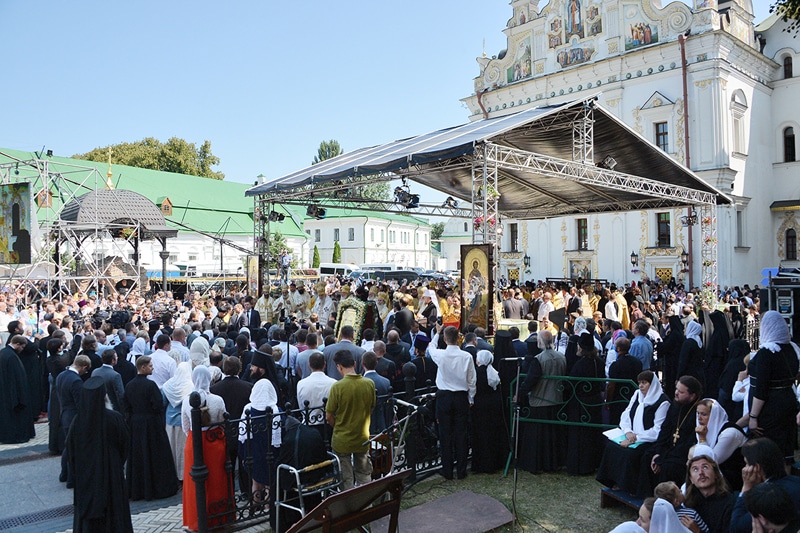 In the morning of Monday the 16th/29th of July 2013, a Patriarchal, Primatial and Hieratic Joint Service was held in Minsk, Belarus, on the occasion of the 1025th anniversary of the Baptism of Rus. The service was attended piously by the faithful people of Ukraine, who were there to also venerate the Holy Cross. The Cross had been brought there prior to the beginning of the celebrations in Russia, accompanied by the Most Reverend Chrysostomos, Metropolitan of Patras and clerics of his god-saved Metropolis.

At the end of the divine Liturgy, His All Holiness Cyril, Patriarch of All Russia, Metropolitan and Exarch Philaretos, and the Patriarch of Georgia, Elias, each made a speech underlining the importance of the Baptism for the existence and identity of the Rus.

This was followed by the deposition of a certificate commemorating the 1025th anniversary of the Christianization of the Russians on the site of the very ancient Church of the Nativity of Theotokos in Zamtsise. In particular, a cornerstone was laid within which a letter was placed commemorating the 1025th anniversary, signed by all Primates for the construction of a new Church.

At 14:00 pm an official reception was held by the Patriarchal Exarch of All Belarus, Most Reverend Philaretos, Metropolitan of Minsk and Slutsk, in the President Hotel. At the reception, His Beatitude Theophilos, our Father and Patriarch of Jerusalem, offered the Most Reverend Philaretos an ivory shepherd’s staff and an ivory cross with which to give blessings to his congregation.

At 18:00 pm a wreath was laid at the Monument standing in Victory Square.

At 19:00 pm the Meeting between the Heads of Delegations of the Local Orthodox Churches and the President of the Republic of Belarus, Mr A. Lukashenco took place at the hall of decorative carpets in the Monument of the Church of All-Saints.

The meeting was followed by a celebratory concert in the vicinity of this Monument.

In the evening, the Belarusian President, Mr A. Lukashenco held an official reception in the White Hall of the Church of All-Saints in honour of the heads of the Local Orthodox Churches.

During their addresses, the Primates expressed their joy over their participation in the celebrations for the Baptism of the Russian and Belarusian peoples, which has indeed determined their political identity along their path through history. On his part, the Belarusian President underlined the renewal taking place in the Republic of Belarus, aimed at the return of the Belarusian people to their Christian roots.