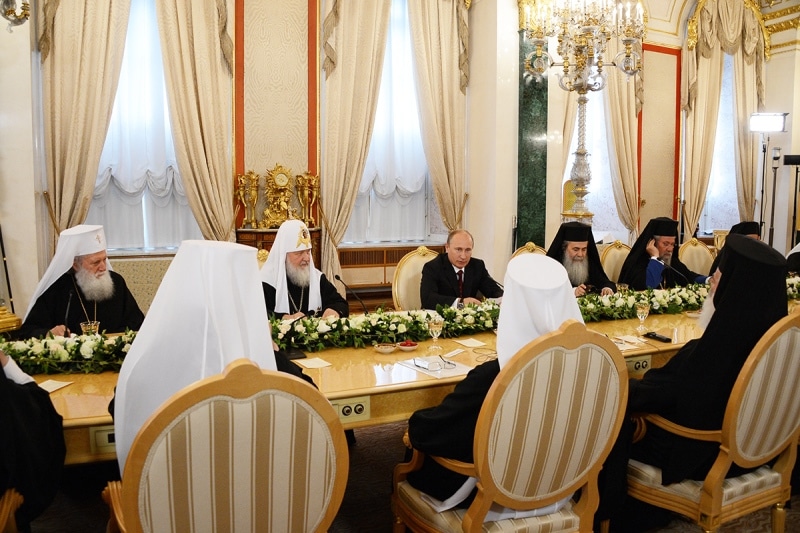 FOURTH DAY OF CELEBRATIONS IN RUSSIA – VISIT TO PRESIDENT PUTIN

In the morning of Thursday the 12th/25th of July 2013, His Beatitude Theophilos, Our Father and Patriarch of Jerusalem, with His retinue of Guardians of the Holy Sepulchre and of the Church of Russia, the Right Reverend Tychon, Bishop of Bodolsk, and the recently appointed Head of the Russian Patriarchate Spiritual Mission (Missia) in Jerusalem, visited the historical monastery of Our Lady Donskaya in Moscow.

The Monastery, dated to the 16th century, contains a large Cemetery wherein lie Greeks of the Greek Community in Moscow since the 19th c. onwards, including distinguished scholars and national benefactors from Ioannina, as well as Russian writer Solzhenitsyn.

Into one wall of the cemetery are kept fine art sculpture pieces rescued from the destruction of the Church of the Saviour during the Russian Revolution, with representations of David and Goliath, of the prophetess Deborah, and of Mariam, sister of Moses.

It is worth mentioning that in 1920, in this particular Monastery, the first Patriarch of Moscow after the two hundred-year long abolition of the patriarchal institution by Peter the Great was placed under home arrest and was permitted to briefly bless the people only from the balcony of His cell.

In this cell, the soldiers guarding him assassinated his assisting monk, having missed their primary target.

Tychon, Patriarch of Moscow, passed away in 1925. In 1992 he was included in the church calendar of the Russian Orthodox Church.

The Patriarchal Retinue venerated His holy relics, kept in the Church, and was warmly received by the hegoumen, Archimandrite Paramonos, who offered His Beatitude an icon of St Tychon, whereas His Beatitude reciprocated with an ivory blessing cross.

During the afternoon of the same day, the Heads of different Orthodox Churches met with the President of the Russian Federation, Mr Vladimir Putin, at the Kremlin.

At the meeting, President Putin expressed his interest in the support of the Orthodox Churches in Russia and across the world and underlined the spiritual rebirth taking place in the Church of Russia, pointing out the contribution that religious leaders may have in the establishment of peace and justice in the world.

In the evening of the same day, the delegations of local Orthodox Churches attended a celebratory concert at the Red Square.