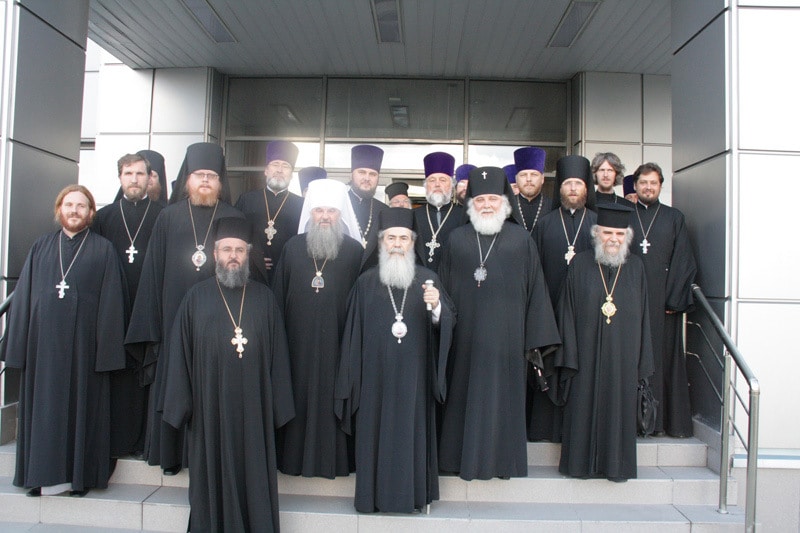 The webpage of the Patriarchate of Jerusalem, in keeping with its earlier commitment to its followers, provides a detailed account of the Patriarchate’s participation in the celebrations for the 1025th anniversary of the Christianization of the Russians, which was inspired and urged by their king, Emperor St Vladimir and queen, St Olga.

A delegation from the Patriarchate of Jerusalem joined the celebrations, headed by His Beatitude Theophilos, Our Father and Patriarch of Jerusalem, and composed of the Elder Sacristan Aristarchos, Archbishop of Constanina; the Most Reverend Theophylaktos, Archbishop of Jordan and Patriarchal Commissioner in Bethlehem, the Very Reverend Archmandrite Damianos, Exarch of the Holy Sepulchre in Greece; and Archdeacon f. Athanasios.

The delegation left Ben Gurion Airport on a Transaero Airlines airplane at 2.45 pm on Monday the 9th/22nd of July 2013 and arrived in Moscow at 20:00 pm of the same day.

His Beatitude was warmly received by Barsanoufrios, Metropolitan of Saransky and Mardofsky, the Right Reverend Tychon, Assisting Bishop of Baldosk, the Archbishop Arsenios of Istra, first vicar of His Holiness, the Patriarch of Moscow, as well as by a number of priests and children offering flowers.

Following this warm welcome, the Patriarchal retinue was driven to the hotel to dine and rest.