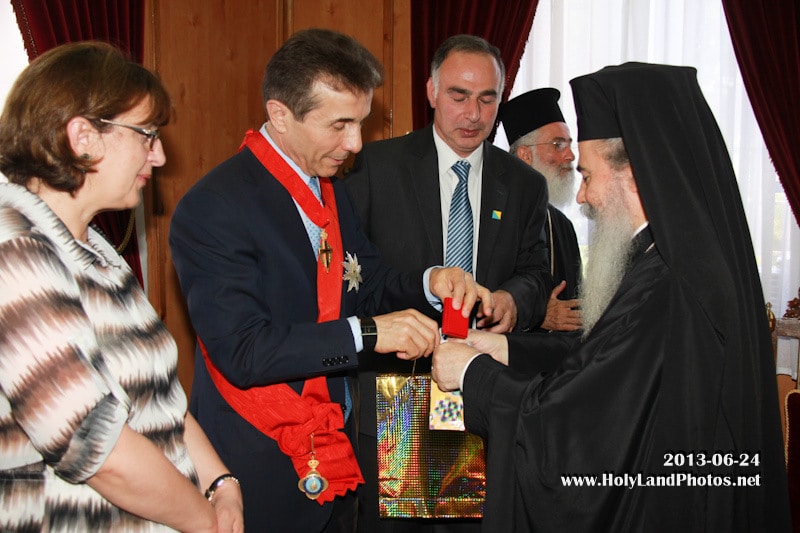 In the afternoon of the Monday of the Holy Spirit, the 11th/24th of June 2013, the Prime Minister of Georgia, His Excellency Mr Bidzina Ivanishvilli, on a visit to Israel, arrived at the Patriarchate of Jerusalem accompanied by a delegation of approximately thirty five of his associates, including the Ministers of Foreign Affairs, Finance and Diaspora.

The Prime Minister and his retinue were received at the Hall of the Throne by His Beatitude Theophilos, Patriarch of Jerusalem, in the presence of the Guardians of the Holy Sepulchre, including the Most Reverend Isychios, Metropolitan of Capitolias and Patriarchal Commissioner; the Grand Chancellor Aristarchos, Archbishop of Constantina, the Most Reverend Methodios, Archbishop of Thavorio, and the former Protosyncellus of the Holy Archbishopric of Cyprus, f. Ieronymos.

Welcoming the Prime Minister of Georgia, His Beatitude addressed him in English as follows (see link: https://en.jerusalem-patriarchate.info/2013/06/25/2550/ ) and conferred upon him the supreme honour of the Patriarchate, namely the Cross of the Order of the Holy Sepulchre, for the reverence he extends towards the Holy Sepulchre and for his piousness. A fine icon of St George and a cross were offered to the Prime Minister’s wife.

Deeply moved, the Prime Minister thanked His Beatitude, saying that the honour conferred upon him was reflected onto the Church and the nation of Georgia, and that this honour would be for him a source of strength for the accomplishment of his mission and the creation of conditions of cooperation between Church and state. He then offered HB a plaque bearing the picture of an ancient temple of the Church of Georgia, conveying the wishes of His Beatitude Elias, the Patriarch of Georgia, and an invitation to visit the country of Georgia. Finally, he thanked HB for welcoming Georgian pilgrims to the Holy Land and supporting Christians on an international level.

After his visit to the Patriarchate, His Excellency the Prime Minister of Georgia, accompanied by His Beatitude, visited the All-holy Church of the Resurrection and paid his respect to the Holy Sepulchre and the Horrendous Golgotha.

The Prime Minister’s call was concluded with a visit to the Chapel of Adam.